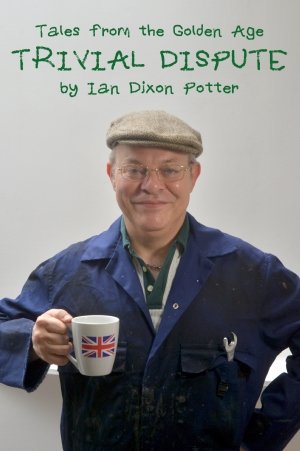 Patience is rewarded for those of us who feel we have had our fill (and then some) of discussions about the consequences of That Referendum in 2016. Trevor (Neil Summerville) voted Leave, but a neighbour, Ewan, voted Remain. While that was the most obvious difference between them, they were somewhat united by a like of classic cars. Even here, however, Trevor likes his cars to be British made, while Ewan’s tastes are more eclectic. The show’s title is quite apt when it wants to be, such as when Trevor is describing the exact details of the precise tactics used in his capacity as a Facebook group admin.

But what starts off small develops into something substantial over time, and I must admit I wouldn’t have guessed the plot’s ending from a mile off. It only becomes clear in the final moment of this forty-minute monologue who it is, specifically, that Trevor is talking to in the first place – and why it is that he provided as much detail in the narrative as he did. It could be easy to dismiss Trevor as a ‘Brexiteer’ as much as Trevor himself dismisses Ewan as a ‘Remoaner’, but it becomes evident that there is far more to what drives each character, and their mutual friends (to borrow a Facebook term) than their opinions on the European Union.

Trevor, having left school at 16, freely admits to not having the university education that Ewan had, and in the micro-level narrative about who meets up with whom at the local pub and what makes and models of classic cars are owned by whom, the play teases out some macro-level points about modern society in Britain today. Trevor has, at the risk of giving too much away, done that rather typical thing in drama where one little lie is covered up by another one, and another, and so on, until it becomes increasingly difficult to maintain an entire network of untruths. Eventually, of course, it all starts to unravel, albeit in a very British and understated way, but Trevor is discerning enough to read between the lines and understand the game is up.

Summerville’s portrayal of Trevor is occasionally fiery but for the most part this is a frustrated man, unhappy at the way his personal reputation has been disrupted by Ewan, a relative newcomer to the local area. Interestingly, neither Trevor nor Ewan come across as likeable (which, frankly, sounds about right for those impassioned either way about the European Union), and the tit-for-tat tactics deployed by both parties are a potent reminder that one could be of whatever social class, political opinion or standing with the local community and still not see the wood for the trees.

Some excellent observations are made about social media etiquette and how words on a screen may not be taken with the sort of tongue-in-cheek manner that would be more discernible in spoken conversation. A startling reminder, too, that one should never take oneself too seriously, even in a global pandemic.

Two worlds collide when self-made millionaire Trevor, owner of the third-largest chain of tanning boutiques in East Surrey, committed Tory and card-carrying Brexiteer suddenly finds himself at odds with a retired academic, the cosmopolitan and liberal-minded Ewan. Although at first a trivial dispute, Trevor resorts to unusual tactics and matters start to escalate…
https://www.goldenagetheatre.com/