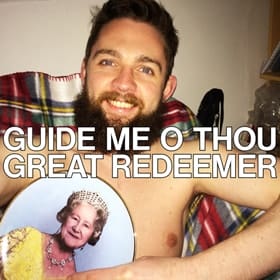 One of the most frustrating things about being a reviewer is when you see something and have to write about it but can say virtually nothing as the show itself is one of those site-specific shows where to say too much would really give everything away. A case in point is Guide Me O Thou Great Redeemer which is getting its premiere at the Camden People’s Theatre.

So let’s see how far I can go with telling you something of my experience. When I arrived, I was sent down into the basement to a door with a notice on the outside “Queen Mother Remembrance Society, please knock and wait”. A few seconds after knocking, the door was opened by our host David (David G. Lees) who welcomed each of us in turn with a personal remark. David himself is a tall Glaswegian who is currently living in London but is moving – albeit reluctantly – back to his hometown soon. And that’s the reason for tonight’s gathering. David wants memories of London to take back with him, and the Queen Mother Remembrance Society is the place where he will get them as – no spoilers, it’s on the website – it is actually a group-sex party for like-minded Royalists. Over the course of sixty minutes or so, we get to learn a lot about the Queen Mother – including her favourite cocktail which I will be making at home now – and even more about David and his own particular life.

And that’s all I can tell you about the show really. Writer Paul Haworth has put together a really fascinating story which is full of surprises throughout – including an absolute TARDIS of a suitcase that contains everything a group-sex party needs from cheese flavoured nibbles to a jumbo pot of vaseline. Initially, there were moments when I was a little uncomfortable with the presentation but I’m not sure why – it’s probably just a British thing, sex parties aren’t the norm where I’m from. However, by the end, I was totally with David and wanted the best for him with whatever way things turn out for him in the future.

All told, Guide Me O Thou Great Redeemer is a really fun piece. It relies on a small audience with whom David interacts throughout, I couldn’t see it working as well with a larger one. But, that is a real bonus for the audience members as the presentation becomes quite personal and we follow David’s story on a level that wouldn’t happen with a larger number of people.

David G. Lees is really good as David. He came across as such an affable fellow and excellent host. In fact, I must remember to invite him to my next sex party as he seemed to come meticulously prepared for everything. His devotion to the late Queen Mother and the rest of the Royal Family felt very genuine, and the joke about the fishbone delivered almost as a throwaway line, was absolutely brilliant.

All told then, Guide Me O Thou Great Redeemer is a pretty surreal show that, on the whole, worked very well throughout. I think it could actually have been longer and possibly looked towards Dave’s future, but that is just me, never satisfied with what I’ve got. Anyhow, I left the theatre with a smile on my face and the feeling the previous hour had really been time well spent.

David is leaving London, he’s going back home to Glasgow, but before he moves he’s organised one last meeting of the ‘Queen Mother Remembrance Society’ AKA a group-sex party for like-minded Royalists.

‘Guide Me O Thou Great Redeemer’ is a site-specific performance set in a function room. It is a sex/drugs/body-positive musical comedy that invites its audience for an unforgettable sex party.

Written by Paul Haworth
Performed by David G. Lees
Duration 60 minutes
Venues are only accessible by stairs
Saturday 13 and Sunday 14 May at Camden People’s Theatre
and Saturday 20 May in The Vestry at the Oak & Pastor

I wouldn’t exactly say Ben Forster appearing as himself in this musical comedy is a career highlight (he is, after all, someone who has played the … END_OF_DOCUMENT_TOKEN_TO_BE_REPLACED

It’s an intricate plot, laced with some subversive humour - that the female character is simply called ‘The Woman’ (Molly Lynch), for instance, is … END_OF_DOCUMENT_TOKEN_TO_BE_REPLACED

Andrea McArdle didn’t, when the 1978 movie Rainbow was released, look or sound like Judy Garland, and she still doesn’t. You’d be forgiven for … END_OF_DOCUMENT_TOKEN_TO_BE_REPLACED

TENNIS ELBOW is the first play that John Byrne has written for thirteen years, and is in fact a companion piece to his critically successful Writer’s … END_OF_DOCUMENT_TOKEN_TO_BE_REPLACED

It’s all a bit banal, really - or perhaps I’m too heavily influenced by some of the other online productions that I’ve seen recently, which deal with … END_OF_DOCUMENT_TOKEN_TO_BE_REPLACED