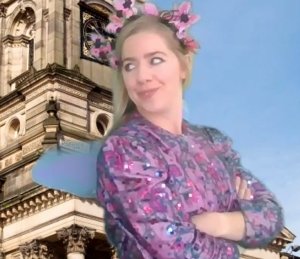 This production of A Midsummer Night’s Dream is an adaptation of Guildford Shakespeare Company’s (GSC) 2017 open-air production. Lotte Wakeham, who is now Artistic Director of the Octagon Theatre, Bolton, has returned to GSC to direct this online version, a co-production with the Octagon Theatre. I am really pleased that this, like all GSC’s online productions this year, has been so popular that two extra performances have now been added on the 2nd and 3rd October.

Puck (Emma Fenney) is our guide for the evening; she explains that the play is set in Guildbolt, a realm presided over by Theseus, a duke who is about to get married. It is a strange place where all the mortals are looking on from little boxes!

This is a very cleverly designed production; the actors are socially distanced, so do not appear on screen together and this something that you hardly notice, as the action switches from one actor to another so quickly. The scenery, created by the excellent virtual backgrounds designed by Beth Mann, works well but the actors seem to be floating awkwardly in front of it rather than appearing within it, as would be expected if real scenery had been used.

The cast of just six actors all does an excellent job performing several parts each. Misha Duncan-Barry, who makes her GSC debut in this production, is worthy of special mention as she tackles the parts of Helena and Snug. Her Snug is timid and nervous about performing but is surprisingly ferocious as the Lion when the final production is staged. Jack Whitam switches, effortlessly from Demetrius to Flute and seems to particularly enjoy his
part as Flute-playing the beautiful Thisbe in the rude mechanicals play performed for the Duke’s wedding celebrations. Matt Pinches never disappoints and his pre-performance warm-up routine, as Bottom before going onstage as Pyramus, had me laughing out loud alone on my sofa.

I may have had a problem with my internet connection but some of the cast’s movements seemed rather jerky and their speech somewhat distorted. However, the introduction did state that, if this was a problem, then the production could be viewed again later. I enjoyed the audience participation, with waving, applauding and wing flapping, it is nice to get a bit of exercise nowadays when we rarely get an opportunity to leave the house.

I really enjoyed this production but found myself missing so much about live performances: the programme to peruse, the interval mingling and the Gin and Tonic. Come to think of it, I could easily have managed the Gin and Tonic myself. There really isn’t any substitute for live theatre but, in the meantime, this is a pretty good second best.

A MIDSUMMER NIGHT’S DREAM is Shakespeare’s best-loved comedy, featuring four young lovers who find
themselves lost in a mystical wood populated by warring fairies, mischievous sprites and an earnest group of
amateur actors, one of whom seems to have grown a donkey’s head…

Following the phenomenal success of GSC’s online live shows in May and June, the Surrey-based theatre
company have teamed up with one of the North-West’s premier producing theatres to bring another live adaptation
into the living-rooms of audiences North and South.

A Midsummer Night’s Dream will be an especial adaptation based on GSC’s 2017 open-air production (Essential
Surrey ★★★★★; “Infectious humour and feel-good optimism” The Stage ★★★★). The original show, set in the
1960s, was directed by LOTTE WAKEHAM, who is now the Artistic Director of the Octagon Theatre Bolton, and
returns to direct this online version.

“Keep it shallow, keep it pretty, keep it moving,” declares Justin Vivian Bond, letting the audience determine for themselves what precisely is really … END_OF_DOCUMENT_TOKEN_TO_BE_REPLACED

This play didn’t do that well on Broadway the first time around in 1963, and did worse the second time around, even with a revised script, running in … END_OF_DOCUMENT_TOKEN_TO_BE_REPLACED

One of the very few good things about the COVID pandemic is that the opportunities to live stream theatre performances have increased exponentially, … END_OF_DOCUMENT_TOKEN_TO_BE_REPLACED

Exploring both the Jewish and Christian faiths, Candlesticks in some ways puts forward some good arguments for systems of belief that exist entirely … END_OF_DOCUMENT_TOKEN_TO_BE_REPLACED