It’s well known that the Prince of Denmark is a gloomy kind of chap who mopes around a lot. Usually, this is put down to the death of his father and the actions of his mother and uncle but, maybe there is a different explanation. An idea that is explored by Series2 Theatre Company in their production of Hamlet at the Lion & Unicorn Theatre. 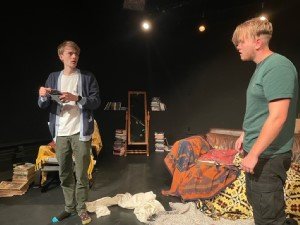 In a basement flat, Hamlet (Joseph Ryan-Hughes) is mooching around. He wanders back and forth in a distracted manner clutching a pamphlet in his hand. As he finally sits, he hears a strange sound which scares him. The source of the sound is his friend Horatio (Alex Dean) who has fallen asleep. He is there to support Hamlet whose father has recently died. It is a difficult task for Horatio as Hamlet is not only inconsolable but is also starting to suffer from paranoia, even questioning Horatio’s motives for visiting him. As time goes on, Hamlet’s coping mechanism doesn’t really seem to be working and, if anything, is making his paranoia worse, but Horatio stands by to support his friend.

Harry Reed, who is the adaptor and director has done something very unusual in this production. They have taken Shakespeare’s script and taken out all the dialogue except between Hamlet and Horatio. This gives the audience a chance to really concentrate on the relationship between the two characters and particularly how Horatio tries to support his friend. And I have to say that as an idea it really works and makes for a fascinating sixty minutes of theatre.

The writing is a major part of this of course, and let’s be honest, you can’t go wrong with original Shakespearean text, but in order to work the production relies on two very strong actors who can not only bring their own character to life, but also establish that true bond of friendship that the play requires. Ryan-Hughes and Dean have got that link and, as such, give the story a wonderful air of reality. The characters are so different in temperament and energy. Ryan-Hughes’ Hamlet is edgy, nervous, sometimes frenetic, and always teetering on the edge. Dean’s Horatio is quieter, more introspective, often not physically doing much but still being a part of the action. Both actors nail their parts beautifully and whether they are playing chess or fighting on the floor, it all feels just right.

The set is nicely basement flat student/young person chic, with a big old sofa covered in throws and piles of magazines all over the place. It feels homely and reflective of Hamlet’s personality before the problems of his world bore him down.

All in all, this is an unusual but very good Hamlet. The idea of just using the two characters works on the whole, though the part where Hamlet and Horatio watch the ‘play’ on television felt, to me, like it needed a little bit more work as it didn’t really flow in the same way all the other parts had. Having said that, for a production that has taken a tragedy as its premise, Hamlet has some surprisingly amusing moments – I mention Yorrick at this point – and is very entertaining. The show works well thanks to two very talented actors not only delivering those wonderful words, but actually being in the moment so that the audience feel they are travelling with them on Hamlet and Horatio’s story.

This modern adaptation of Shakespeare’s most famous play is guaranteed to be unlike anything you’ve seen before. This production focuses solely on Hamlet and Horatio, giving us a unique insight into their relationship, whilst maintaining the original text. We meet Hamlet and Horatio in their rundown basement flat, 2 months after Hamlet’s Father’s funeral. As they navigate the wilderness of grief together, unhealthy coping mechanisms manifest not a far more dangerous reality.

This play was first put on at The Mill at Sonning in early 2010 - the world has, of course, changed significantly since then, and the script has been … END_OF_DOCUMENT_TOKEN_TO_BE_REPLACED

It’s easy to see why the Orange Tree has brought this one back for another run, less than a year after its first outing here. This is a bold, … END_OF_DOCUMENT_TOKEN_TO_BE_REPLACED

I always loved Choose Your Own Adventure books. Definitely not the Steve Jackson ones where you had to roll dice (who did that?) to find out whether … END_OF_DOCUMENT_TOKEN_TO_BE_REPLACED

Well, there’s a bit about Pablo Picasso’s (1881-1973) paintings in this show that bears his name. But it’s mostly about his approach towards women. … END_OF_DOCUMENT_TOKEN_TO_BE_REPLACED