The Colour House Children’s Theatre is a tiny seventy seater theatre situated in the heart of the attractive Merton Abbey Mills arts village. The theatre opened in 1995 in a five-hundred-year-old listed building and since then it has staged over 80 original musical adaptations of famous fairy stories and more than 100,000 people have viewed their productions. 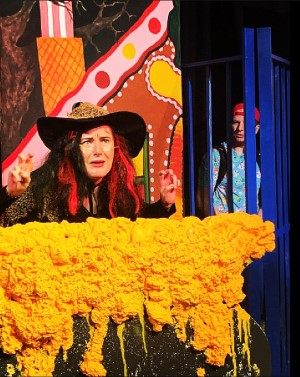 There are little theatres like this all over England and they are an important theatrical entry point for both children and performers alike. The theatrical world would be much the poorer if they could not survive.

There is also energy and creative ingenuity applied to this musical production of Hansel and Gretel despite the size of the stage being less than 3 by 4 meters in size for most of the time and the cast being only four, performing multiple roles as required. Though this is not usually the most likeable fairy story everyone leaves at the end of this telling having had fun, the Wicked Witch getting her jokey comeuppance in due course as pantomime villains do.

The show is propelled throughout by the musical soundtrack created by musical director, Lyndon Samuel. He cleverly uses fragments of an iconic pop song to describe the witch so that only a few notes have to be played during the show subsequently and the audience thinks of her. Other songs have satisfyingly strong hooks too.

Phoebe Holmes as Gretel creates a character who is very believable though she is playing a young schoolgirl. Phoebe is a terrific singer who brings the substance of that talent to the songs in the show. Hansel, played by Joe Greenslade brings energy and enthusiasm to the male lead role. Aoife Scott who plays the Wicked Witch Hermione (and the children’s attentive step-mother) is always enjoyable on stage, bringing a lively sense of menace and dynamic audacity to her multiple roles. Oliver Harding also plays multiple roles describing his versatility as a performer. His rapping bee luring Hansel into danger is a notable focus of the show.

All of the four performers dance as well as sing. The sense of movement created in this little theatre by Stacey Monahan, the choreographer, is quite extraordinary and a vital contribution to the success of the show.

The lighting is also well done using the modest resources the little theatre has. Light reflecting from a glitter ball, for example, is surprisingly effective.

This is not a West End show rather it’s nicely done ‘starter theatre’ providing an accessible pathway for children to discover an enjoyment of live performance. The rating review given takes this context into account.

After the show, there are stalls just outside the theatre building to buy toys and similar, somewhere to browse fossils and rocks for sale as well as attractive cafes and a pub next to the river. There’s also a city farm a short wander away. As a family destination, there’s much to be said for the location of the Colour House Theatre.

The tickets for Hansel and Gretel are relatively expensive at £10 each including for children, no matter if they’re very small. If you’re an adult accompanying a toddler who decides in the first few minutes they’re terrified by the spooky witch (exciting for older siblings) and you have to leave to avoid causing disruption in the small space that’s £20 vanished. Having said this most children do seem to manage the fright level of the fairy story.

The Colour House Children’s Theatre is putting on Cinderella next for the Christmas season and doubtless, with all its experience and ingenuity, that will also be another enjoyable theatrical event for children.

With lots of fun and thrills for the whole family, come and join brother and sister Hansel & Gretel as they forego their love of sweets and venture deep into the Weird Wild Wood where they meet a host of colourful creatures from Prue the Pigeon to a rapping gangsta Bumblebee called Buzzy-B!! But they must be brave – the wicked Witch Eucalypta is hungry and looking for her next feast!

What secret lies at the heart of the Dim Dark Dell?… Will Eucalypta succeed?… And who is the mysterious Green Man?

It is the duty of every citizen to answer the call to support and protect the United Kingdom and its allies so last night, while the rest of the … END_OF_DOCUMENT_TOKEN_TO_BE_REPLACED

Harold Pinter only ever wrote one novel. And, let's be honest, he didn’t rush into this literary endeavour. He started it in 1950 and the book was … END_OF_DOCUMENT_TOKEN_TO_BE_REPLACED

How far would you go for the people you love? What lies would you tell? What sacrifices would you make? That’s the question at the heart of The … END_OF_DOCUMENT_TOKEN_TO_BE_REPLACED

“All political lives, unless they are cut off in midstream at a happy juncture, end in failure, because that is the nature of politics and of human … END_OF_DOCUMENT_TOKEN_TO_BE_REPLACED