“With Christ, which is far better”, so my evangelical upbringing taught (or rather tried to teach) me whenever someone died. As a schoolboy, I drew two conclusions from that: firstly, I had better keep my wits about me or I might end up in a suicide pact with religious fundamentalists, and secondly, there must be something decent about the next life: after all, people don’t usually come back to Earth for second helpings. Here, however, 25-year-old Steph (Skye Hallam), has – suspension of disbelief, please – indeed returned from the afterlife briefly to talk about what it is like. 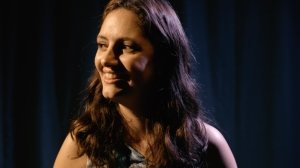 She passed on a sunny afternoon, she says – 19th August 2018, to be precise. I agree it was a nice day: I spent a good portion of it sat on a train returning to London from the Edinburgh Fringe enjoying the view. This is a timely piece of theatre, even if it comes across as a stream of consciousness rather than the passing on of pearls of wisdom from beyond the grave. Still, freed from the tyranny of the daily grind, Steph is enjoying not having to worry about anything, having worried too much about ‘everything’ during her short time in the land of the living.

There’s a considerable amount of ground covered, particularly given the forty-minute running time, and the monologue flits from topic to topic, making it sound like disorganised chaos, but the beauty of the production is in the range of emotions that can’t help but shine through, albeit with subtlety. My initial thought during the performance was to wonder why on earth there’s talk of, for instance, (the music of) Michael Jackson, smartphone apps and Steph not having seen Harry Potter and the Cursed Child Parts One and Two before she popped her clogs, but the play (this one, that is) would frankly be too dark and depressing if it only concentrated on the weightier matters.

Some of what is talked about is fairly predictable, such as the regrets Steph momentarily alludes to, and how she would take a different approach if she could live her life again. Sarcastic wit (a contradiction in terms for some) often results in a quip or a punchline delivered to a side-on camera, in the style of comedian Miranda Hart. An opinionated character, she doesn’t, for example, care much for ‘cancel culture’, and uses humour to both establish and then maintain rapport with the audience.

Hallam’s warm and engaging manner makes for a compelling and worthwhile experience in this brief and intriguing show.

Heads or Tails
by Skye Hallam, part of The Living Record Festival

“After life, things needn’t be so bad.”

Heads or Tails is an uplifting piece of existential pop culture comedy.
It tells the story of a young actress taken too soon, who is given the opportunity of a lifetime, to return to earth to perform a one-woman show.

Steph uses her time to help those still living to learn from the regrets of the dead and to reminisce on her life lost.

It’s a show of its time. Well, it isn’t really – it’s a show first produced in the 1950s, with this production placing the action in 1913. The set … END_OF_DOCUMENT_TOKEN_TO_BE_REPLACED

The whole narrative in Lift is almost totally implausible, at least to me, until the penny dropped about two-thirds of the way through. The central … END_OF_DOCUMENT_TOKEN_TO_BE_REPLACED

“Three Decembers is the finest modern opera that I have seen.” So wrote Chicago reviewer Tom Williams, having seen its premiere in 2008, and I can do … END_OF_DOCUMENT_TOKEN_TO_BE_REPLACED

There’s a surrealness to Mission that the production’s own script readily acknowledges, with more than one character admitting, separately, that they … END_OF_DOCUMENT_TOKEN_TO_BE_REPLACED

In June 1988, Bob Dylan set off on what has become known as “The Never-Ending Tour” and apart from a break due to the pandemic, it’s still going 34 … END_OF_DOCUMENT_TOKEN_TO_BE_REPLACED