As if there weren’t already enough drama in his life, off the field and on, an intriguing stage play tackles, firmly but fairly, a lost weekend at the height of the young Best’s renown and the depth of his despair. 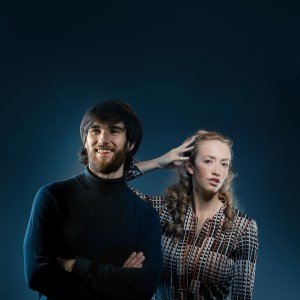 The premise is stark and true. One Saturday in 1971, instead of turning up to play for Manchester United, he is to be found – by us, at least – in the north London flat of a young woman. Not a rare event for such a Lothario, you might think, except that this particular young woman, Sinead, is an emerging star in her own right and the daughter of the renowned Irish actor Cyril Cusack.

They talk, they flirt, they make love, briefly oblivious of the media invasion that has formed around them in the streets of Islington while the weekend’s league programme does its best to hold the public’s attention in his absence. But who has tipped them off? Surely not Sinead, who is warily beguiled by the boyish privacies and simplicities of her lover. And surely not George himself, despite his flair for manoeuvres that flummox the opposition.

This raises the question of exactly who, or what, is the opposition here. Well, up in Manchester there is the formidable, fuming figure of Sir Matt Busby, manager of United and crucial mentor in the development of the young Northern Irishman’s game. Never a good idea to get on the wrong side of him, particularly when you owe him so much. Then there is Cusack Senior making an occasional appearance paternal but peppery, in his daughter’s flat.

It’s he who fingers the true villain of the piece when he notes the quantities of alcohol finding their way down George’s throat. Not that Best needs to be Yellow Carded on this. He already has his own number where addiction is concerned, and this self-knowledge gives the young man his true potential for tragic destiny.

The play had its first outing at the Actors Centre in Soho in 2018, then played in Belfast and the Edinburgh Fringe. It is the work of fellow Northern Ireland actors Rafaela Elliston and Robbie Martin (with Mark Gillespie), who themselves take the roles of Sinead and George. At the risk of getting in a plug for method-acting, it is worth mentioning that Elliston and Martin, both graduates of London’s Poor School, are themselves in a relationship.

Deftly directed by Sepy Baghaei and Tice Oakfield, they manage a tender, edgy dance around their feelings for each other – and for themselves. Self-indulgent though drunks may be, there is a disarming quality to Best’s declaration, more informative than self-pitying, that “you have no idea what it’s like to be me.” However accurate this reconstruction may or may not be, it has a fearsome candour about the odds against love carrying the day in this game of two halves.

The relentless publicness of his life is dramatically flagged up by projections of that Saturday afternoon’s soccer commentaries: “Chelsea 1, Manchester United 2….Does Manchester United, or Matt Busby, or even football itself, need George Best?” This, and more, all delivered with the still-military intonations of postwar broadcasters; a sort of aural monochrome that reminds one that a whole half-century has passed since Best’s all-too-brief heyday.

I happen to have met him while I was working at The Times. It was October 2005. I believe this was the last press interview he gave. What is certain is that a matter of days later he was readmitted to hospital in Chelsea, where he would die on November 25th.

Sitting opposite him was disarming. You could see flashes of the old, as in young, man; the shyness and vulnerability that shared his face with mischief and wolfishness. His manner veered between chastened and defiant. One minute he would be ruing his decades of overdoing it, the next he would be declaring that, hell, life was for the living and hadn’t he done pretty well in that department.

There were long periods when he remained silent, not out of pique but because he was happy to leave the talking to his agent and unfailing friend Phil Hughes. There we sat, in an office in Fulham, with Best looking a little like a spectator, glancing one way and then the other as the conversation changed ends. On the shelves behind him was a big blue, hardback called Alcoholics Anonymous. It was entirely unthumbed; pristine as a soccer pitch before kick-off.

A phone rang. It was for him. The call was brief and all the talking was done by the person at the other end. I mention all this because it came back forcibly while I was watching this play. You might say it was a closing scene, set thirtysomething years into the future, closing the action as everyone, including him, knew it would.

1971. Footballer George Best has gone missing ahead of a crucial match, and now the paparazzi are holding a London flat under siege. Rumours are he’s inside with up-and-coming actress Sinéad Cusack, and the two are surrounded. With no way out, the couple are forced to confront the demons they’ve both been keeping from the world.

Inspired by real events, Hello Georgie Goodbye Best explores personal demons, the price of celebrity, and a famously missing 3 days. What exactly happened when the world’s greatest footballer, with a career in the balance, was trapped in a room with a young star who had everything to lose?

This isn’t the first production to go down the road of referencing a one-star review of their show (from a different publication, I hasten to add). … END_OF_DOCUMENT_TOKEN_TO_BE_REPLACED

Two sisters reunite after the death of their mother, and secrets pour forth. Robert Holman’s new play gently exhibits talented classical acting in a … END_OF_DOCUMENT_TOKEN_TO_BE_REPLACED

Everyone’s vexed in this show, though some have clearer reasons to be than others. Mrs Driscoll (Tameka Mortimer) is struggling with a home life that … END_OF_DOCUMENT_TOKEN_TO_BE_REPLACED

The penultimate production of the 2021 Tête à Tête Opera Festival, based at London’s Cockpit Theatre and showcasing contemporary and avant-garde new … END_OF_DOCUMENT_TOKEN_TO_BE_REPLACED

Relatively Speaking premiered in 1967 and is the sort of show that is, by contemporary standards, very much of its time, and not just because of … END_OF_DOCUMENT_TOKEN_TO_BE_REPLACED