This production of Henry V is the eighth of Guildford Shakespeare Company’s (GSC) Zoom shows. I am watching on St. Georges’ Day, Shakespeare’s birthday, normally a day to be out enjoying a sonnet walk. Well, hopefully, next year. 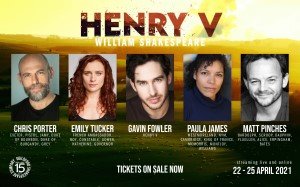 Caroline Devlin directs this online version, with sound design by Matt Eaton, digital design by Beth Mann, costume design by Anett Black and Philip d’Orleans as Fight Director. I have purposefully mentioned the artistic team first as they have done such a fantastic job. The production is cleverly designed, boxes of costumes and props were delivered to each actor’s home in advance of the production. The five actors then perform in their spare rooms, which have been transformed into green screen studios. I cannot begin to imagine how you would choreograph a fight between characters in completely different locations!

The play begins with all the actors in their own little boxes getting ready to perform. At times when the characters should be on stage together, they appear in front of the same virtual background which seems to trick your mind into thinking that they really are on the same stage. The scenery is created with unique virtual backgrounds, some of which are videos, which really helps with the realistic atmosphere. Beth Mann has exceeded her usual high standards. I felt as if I was in a video game during the battle, which was not an experience I enjoyed, but I do not suppose I was meant to! The torrent of arrows coming towards me felt so realistic, I wanted to duck out of the way.

It is amazing what GSC can do with a cast of five. Gavin Fowler is a handsome and charismatic Henry V; my favourite St Crispin’s Day speech is in safe hands with him, beautifully delivered and as inspiring as ever. The rest of the cast must have received extremely large boxes of props and costumes, as they all tackle numerous parts. My favourite scene was Princess Katherine (Emily Tucker), learning English from her maid who, in an inspired bit of casting, was played by Matt Pinches. The cast is completed by Paula James who plays many parts, including the King of France, and Chris Porter playing multiple roles, including the Duke of Bourbon and the Duke of Burgundy, a shady politician. Relevant as ever!

The performance ended with the ‘Your Imaginary Forces‘ gallery, made up of submissions from aspiring artists on the themes of Love, Humanity and New Beginnings in Henry V. The gallery included paintings, poetry and music. As a WI member, I was particularly impressed with the knitted chains submitted by Rosin Godwin. Another triumph by GSC and I am really looking forward to seeing them all together again in their outdoor productions this summer.

The country is exhausted; political infighting has plagued the people for far too long; Europe looks on and laughs. A charismatic, untested young leader ascends the throne. The people hold their breath… Yet Henry’s vision will see him, and his country, turn around their shattered state, take pride in who they are and collectively forge a new peace and prosperity.

Taking inspiration from Chorus’ first speech in the play where the audience is called upon to use their ‘imaginary forces’ and ‘into a thousand parts divide one man’, FIVE actors will they bring to life Shakespeare’s Henry V, playing 26 characters.

There’s a warm and welcoming presence about Katie Arnstein anyway, although offering a sweet to audience members as we filed in helps too. Also, the … END_OF_DOCUMENT_TOKEN_TO_BE_REPLACED

The on-stage tiling makes it feel very much like certain scenes are set in a swimming pool, which may be stating the obvious but in a performance … END_OF_DOCUMENT_TOKEN_TO_BE_REPLACED

“I am a little bit of a nerd,” smiles Joe Sellman-Leava, playing himself, or at least a version of himself he’s willing to portray to audiences at the … END_OF_DOCUMENT_TOKEN_TO_BE_REPLACED

This is the kind of show that will preach largely to the converted, if not the choir itself, although this is probably by default rather than design. … END_OF_DOCUMENT_TOKEN_TO_BE_REPLACED

Cabaret is not just the name of a highly successful musical and film, but according to my good buddies at Wikipedia is a form of theatrical … END_OF_DOCUMENT_TOKEN_TO_BE_REPLACED