Home » Reviews » Her Hem at the Etcetera Theatre in Camden

The thing about Oliver Sansree (Luke Culloty) is that he appears to be a designer of clothes that people could feasibly wear, as opposed to items seen on catwalks at London Fashion Week and other such events: those costumes are undoubtedly innovative and push boundaries, but it is a struggle, at least for me, to determine any reasonable context in which such clothes would be appropriate. Heavy on conversation, Her Hem is entirely set in one of Sansree’s fitting rooms. I do not mean those cubby holes in high street department stores – assuming they still exist: I haven’t been in one since before the pandemic – but a large private room in his London office. It is probably reasonable to assume the House of Sansree has branches in other fashion hotspots, though the focus is very much on events at home, of which there are plenty. 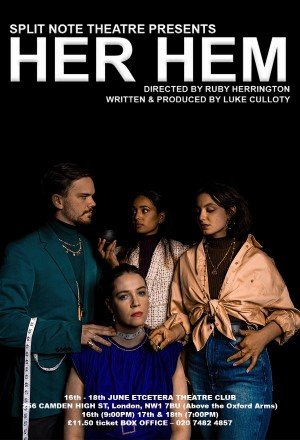 Linda Jones (Nomi Bailey) is not, as she repeatedly finds herself saying, not her father: a politician with controversial views. At least he appears to have had a consistent point of view to call his own. Anyway, for Sansree, a client is a client, and business is business. He does not, despite protestations from his sister’s partner, Maja Koska (an impressive Irina Anghel), and his poorly treated assistant, Claire Chopra (Horeb Cohan), see the bigger picture, in which a media frenzy results in other clients going elsewhere, such that by continuing to design for Jones, he is losing potential income overall.

The play does not dwell for long, if at all, on economics. There are subplots, y’see – Sansree is not in the best of health, and the fashion media is aware of some, but by no means all, of the details. Later, Chopra reveals more about her own struggles, both personal and professional, being a woman and a person of colour. It is all blurted out very suddenly, and led up to a rather abrupt end to the show. I wasn’t wholly convinced that the chauvinistic Sansree would have simply sat down in response to being told to ‘shut up’ by his assistant. It is far likelier he would have launched another round of verbal abuse about how she should show some respect and that he tells her what to do, not the other way around – that sort of thing. That said, by giving Chopra the final word, the play leaves its audiences with food for thought.

But Chopra’s part remains, however positively I may try to spin this, grossly underwritten. A show presumably meant to address how women are (mis)treated by the sort of media outlets that thrive on celebrity gossip, as well as society at large, itself spends too much time on Sansree, his ailments and his contradictory nature, in which he wishes to be left alone one moment and is practically screaming for assistance the next. It’s entirely possible that this is what the production aimed to achieve, showing how women in the fashion industry are pushed aside. In terms of dramatic effect, however, it doesn’t quite work as well as giving Chopra a voice much earlier in proceedings would have done – it is almost as if she is an afterthought, or a postscript after the main event.

It doesn’t help, either, that all the characters are thoroughly dislikeable: Jones is as contradictory as Sansree, ordering music be turned on, only to order it be turned off immediately after her initial demand is finally met. Koska, meanwhile, is pushing for more conversation about political ideologues, while Sansree is implausibly demanding people speak only of the measurements of Jones’ dress. One can only be grateful such a command was ignored: it really would have been a dull evening at the theatre if no other topics of conversation came up.

My own near-total lack of knowledge in the fashion industry aside, this wasn’t the easiest show to maintain interest in. It also tries to tackle a large number of pertinent issues in contemporary society at once, without plumbing the depths of any of them. Sometimes less is more.

Oliver Sansree in a last resort is assisted by his sister’s partner Maja Koska, in a dress fitting for the daughter of a controversial MP, having had the rest of his works stage a walkout in protest of dressing her. Oliver and Maja attempt to put aside their own views, but quickly deteriorate into a challenging debate about the moral question of dressing her or condemning her.

Nikhil Parmar’s one-man show, originally written as a TV pilot, manages to touch on a wide range of themes from Islamophobia to modern fatherhood with … END_OF_DOCUMENT_TOKEN_TO_BE_REPLACED

Handel’s 1738 opera Serse (or Xerxes) is an exploration of power, love and human frailty. King Serse falls in love with the voice of his brother … END_OF_DOCUMENT_TOKEN_TO_BE_REPLACED

Lea Salonga has her fans. She also has some superfans, the ones who yell, “I love you Lea!” at almost every opportunity. If that wasn’t enough, there … END_OF_DOCUMENT_TOKEN_TO_BE_REPLACED

I have no hesitation in saying that the 1952 movie “Singin’ in the Rain” and its 1985 stage version is one of the greatest musicals of all time, … END_OF_DOCUMENT_TOKEN_TO_BE_REPLACED

There are, Maria Caruso was keen to emphasise in a post-show discussion, no wrong answers when it comes to responding to Metamorphosis or even … END_OF_DOCUMENT_TOKEN_TO_BE_REPLACED