Home » Reviews » Hivemind presents: Lord of the Game of the Ring of Thrones 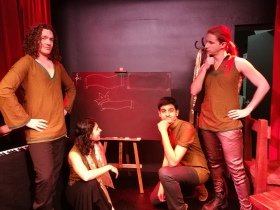 The intimate atmosphere of the theatre at the Museum of Comedy is perfect for a performance of this genre. And when I say intimate, I do mean intimate; each audience member, by the end of the show, knew their immediate neighbours better than their own family.

Thankfully everybody was in a happy frame of mind, so rather than inducing claustrophobic panic, the enforced physical proximity engendered a feeling of warm camaraderie, a sense of all being in this together. It also meant that the audience was laughing before the performance even began.

The front row of seats was practically on the stage, meaning that the ensuing audience participation felt not only inevitable but natural.

With the encouragement of the actors the audience invented, almost despite themselves, a fantasy world, complete with improbable cities and outlandish natural features. The cast then had the daunting task of coming up with a story and characters befitting this strange new land. The theme this month was fantasy, as evinced by some floppy frilled shirts and evil cloaks, and the group took it to extraordinary heights, with a body count that would shock even George R. R. Martin.

Hivemind was born from a Cambridge improv troupe called the Impronauts, and they have been touring various improvised shows for the past two years. During this time they have clearly come to know each other extremely well, leading to an almost telepathic understanding and communication between them. Even newer members of the gang blended in seamlessly, and their split-second reflexes and feats of elastic mental flexibility were awe-inspiring. These lightning responses were mirrored by the pianist and the lighting operators, who were always ready with a doomy crash of chords and a red wash when needed.

Of course, the plot itself was complete nonsense, but that is precisely the point. We were not there for a plausible story, but to enjoy and marvel at the dramatical contortions of this talented bunch, who delight not only in their own ridiculous inventiveness but also in casting theatrical banana skins into each other’s paths. They are quick-witted, likeable, and extremely good at what they do. They are also capable of dealing with an audience full of happy, Friday-spirited hecklers – in itself no mean feat.

High, epic fantasy this was not. A lot of fun it was. They will be performing a similar, but obviously different show on the last Friday of every month for the foreseeable future. If clever, funny, whimsical improvisation is your thing, I urge you to go and see it. You won’t be disappointed.

Ever wanted to create your own smash-hit epic fantasy? Come help comedy troupe Hivemind improvise one for you!

With no script and no plan, we’ll use your suggestions to create an original fantasy tale of blood and wine, honour and treachery, fellowships and actual ships — a tale that has never been told before, and will never be told again.

Featuring a fully improvised musical score, Lord of the Game of the Ring of Thrones promises all of the drama and majesty of the fantasy stories you know and love, but with hopefully none of the lawsuits.

Lord of the Game of the Ring of Thrones
22 February — 26 April 2019
http://www.museumofcomedy.com