Home » Reviews » HOLST: The Music In The Spheres at the Jack Studio Theatre | Review

If I were to say the name Gustav Holst, where does your mind automatically go? If you are honest, it leaves the Earth and soars into the heavens. Mention Gustav and everyone thinks of one piece of music. But how much do you know about the man himself? I’m guessing not that much. I know I didn’t but thanks to HOLST: The Music In The Spheres at the Jack Studio Theatre, I’m a little wiser today. 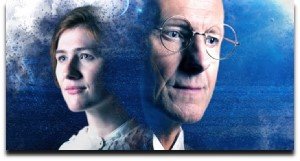 The show starts in 1917 with Gustavus Von Holst (Toby Wynn-Davies) trying to hand his resignation to Ms Gray (Lucy Ioannou) the Head of St Paul’s Girls’ School. Initially Ms Gray wonders if the reason Gustavus wants to leave is that he is having problems with students due the war and his Germanic sounding name. But the truth is Gustavus wants time to be able to devote himself to composing a piece of work he has called “The Planets”. Fortunately, Ms Gray talks him out of leaving immediately and he returns to his normal teaching duties which tonight involves detention with Cecilia Payne (Laurel Marks) a young student for whom music is just a mandatory lesson she must endure in between the academic subjects she lives for. Slowly, Holst manages to capture Cecilia’s interest in his subject and the two of them develop a friendship, more akin to father/daughter than teacher/student. As the friendship grows, Gustav thinks back on his own life and how his father (Alex Stevens), Aunt Benigna (Lucy Ioannou), wife Isobel (Cornelia Baumann) and great friend Ralph Vaughn-Williams (Edward Spence) have been instrumental in nurturing his talent and getting him to the point of being able to complete what would become his magnum opus.

HOLST: The Music In The Spheres is a play that has a great deal of potential. Writer Ross McGregor has obviously undertaken a lot of research into his subject, and on the whole, has put together an interesting piece examining Holst’s life and the influence of those around him. However, I do feel that the production, at nearly two and a half hours, is possibly too long. While there is a wealth of detail, there are times when the pace slows considerably, and I just wanted the story to move on.

McGregor also directs and there are some superb moments in the direction – the music sheets flying just out of Holst’s reach immediately spring to mind – but there are also times when not a lot is happening, and this often coincides with times that the script dipped as well. There were also some verbal anachronisms that felt out of place when spoken in the late 19th, early 20th century.

However, putting that aside, I have nothing but praise for Toby Wynn-Davies’ portrayal of Holst. I was so impressed with his range, running from Holst as a very troubled child, then student and finally as an adult revelling in his music. I also – and I’m no pianist – loved his piano ‘playing’ which really gave the impression that he was playing an invisible piano. I also really liked Laurel Marks as Cecilia, and the scenes between her and Holst in the schoolroom really worked. There was a real connection between both the characters and the actors playing them that made those conversations very believable and real for me.

Overall, there was much in HOLST: The Music In The Spheres that I really liked. The use of elements from “The Planets” to illustrate some scenes was a great idea, and the overall story was captivating. The two lead performers were excellent together and there were truly superb sections of the play that really moved me. I’m not a writer or director so feel a bit of a fraud here, but I think the script could do with a bit of pruning to bring the length down and keep the level at an even keel. However, I left the theatre not only with much more knowledge of Holst than I had ever had, but also with an intense thirst to know more about Pythagoras and the philosophical concept “The musica universalis”.

After a crippling childhood illness robs him of his vision and his ability to hold musical instruments, he embarks on one final desperate effort to write the great work that will define him and classical music forever: The Planets Suite.

The Music In The Spheres tells the story of the man behind the music, as he challenges an elitist industry that sees no space in it for people like him. A courageous story of struggle, discovery and the need to be understood.

Harold Shipman, known to his many patients, family and friends as ‘Fred’, was Britain’s worst serial killer. The official inquiry into his crimes … END_OF_DOCUMENT_TOKEN_TO_BE_REPLACED

Being one of Arthur Miller’s best-made and most challenging plays, The Crucible is also one of his most frequently performed. I was going to say … END_OF_DOCUMENT_TOKEN_TO_BE_REPLACED

To be fair, Linda Lavin called her concert Love Notes, there’s an album of the same name, and that’s more or less what it was about - variations on … END_OF_DOCUMENT_TOKEN_TO_BE_REPLACED

Noughts & Crosses is a euphemism for blacks and whites. The Noughts are the whites and the Crosses are the blacks. In the world of the play, the … END_OF_DOCUMENT_TOKEN_TO_BE_REPLACED

This ‘juke box’ musical offers highly polished, undemanding, feel-good entertainment, showcasing, as it does, 30 songs dating from the 1960s to the … END_OF_DOCUMENT_TOKEN_TO_BE_REPLACED