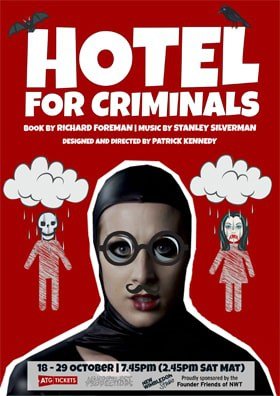 BUZZ! One of the questions I am sometimes asked about shows is whether there is one particular thing, good or bad, that stands out about a production, and will linger in my long term memory. BUZZ! This production of Hotel for Criminals likes to have a highly irritating buzzing noise, too loud and too long, to indicate a scene change. BUZZ! It got to the point where I began to dread the ending of musical numbers because of the deafening buzz that would inevitably follow.

But at least that was as annoying as things ever got in this show, at a time of year when parts of the theatre world take advantage of the build-up to Halloween, putting on productions with more than a modicum of creepiness and fright. That said, to paint a picture of Hotel for Criminals merely as a passable attempt to startle or shock its audiences is to be grossly unfair to a multi-layered musical that, in any event, does nothing of the sort. This does not mean it is a bad show: quite the contrary. With costumes and face paint so extreme it is difficult to take the show seriously. This is intentional, combining parody with a largely jaunty – if complicated – score. It’s more surreal than scary, more funny than fearful.

A very clear and over-enunciated narrator guides the audience through the show’s journey. I suspect for some, the show may come across as a little sluggish, but I found the steady pace a refreshing change from the breakneck pace of so many one-act productions. Further, this show never gives the impression of filling in time or stretching out a thin book to a respectable running time: the momentum is just perfect. The musical numbers drive the storyline forward, and we are never left waiting for a song to finish so the plot can proceed.

The style of humour does not suit everyone. Some were chortling away freely, others rather unimpressed. As someone in the former category, I was pleasantly surprised at quite how charming this production came across. And I’ve never had a free Playbill before in London (the National Theatre does free cast lists, but even these are not Playbills), and found that to be a novelty.

Initially, I thought there was a distinct fringe factor in this show, but with the benefit of hindsight, such a description would not be entirely accurate. The production values are high and it’s clear the cast are well-drilled and well-rehearsed, and unapologetically so. It’s a show best appreciated simply by sitting back and enjoying it for what it is, even if ‘what it is’ is difficult to define. That is part of the show’s appeal, and it’s certainly an unusual piece of theatre. One of my neighbours would describe it as ‘very American’, though there is a gentle touch of British subtlety to be found too.

There really isn’t much to be achieved in being too analytical about the narrative. There’s talk of blood, and perhaps a lyric or two about it too, but none visible on stage at any point. Make what you will of a show set in a hotel with a musical number called ‘Do Not Enter’. It’s not all fun and frolics, with some poignant moments included, giving, overall, a full-bodied theatrical experience. The choreography, even when exaggerated, is in keeping with the deadpan humour that permeates the production.

This show apparently has a cult following in the United States, and I can understand why. I very much enjoyed my stay at the Hotel for Criminals. If you decide to check in, I trust you will enjoy yours.

Written by the pre-eminent Richard Foreman, Hotel For Criminals is a brilliantly sophisticated and funny reworking of Louis Feuillade’s silent film phantasmagoria that chronicles the foul deeds and the mysterious powers of Fantomas and his vampire gang. The audience enters a subterranean world where no boundary, no moment, no person is ever safe or certain. Reality is bent to the whims of Fantomas’s evil imagination and the literal twisted to the point of outrageous.

With music by Obie Award winning and Grammy Award nominated composer Stanley Silverman (Up From Paradise, Dr. Selavy’s Magic Theatre, Africanus Instructus), Hotel For Criminals promises to be the most exciting and subversive show to hit London this year.

This play was first put on at The Mill at Sonning in early 2010 - the world has, of course, changed significantly since then, and the script has been … END_OF_DOCUMENT_TOKEN_TO_BE_REPLACED

It’s easy to see why the Orange Tree has brought this one back for another run, less than a year after its first outing here. This is a bold, … END_OF_DOCUMENT_TOKEN_TO_BE_REPLACED

I always loved Choose Your Own Adventure books. Definitely not the Steve Jackson ones where you had to roll dice (who did that?) to find out whether … END_OF_DOCUMENT_TOKEN_TO_BE_REPLACED

Well, there’s a bit about Pablo Picasso’s (1881-1973) paintings in this show that bears his name. But it’s mostly about his approach towards women. … END_OF_DOCUMENT_TOKEN_TO_BE_REPLACED