Hotline is effectively an auditory blend of the lunar fantasies of Georges Méliès with an informative and sometimes amusing secret history of spaceflight. After an exciting opening, not unlike an Adam Curtis documentary without the pictures, we meet a mysterious star creature, Oxmo, and two US women astronauts who together create a ‘choose your own adventure’ type trip to the moon. Depending on the decision you make other space characters are encountered- some real, some fantastical. Information about space and the history of lunar travel unwinds over a lively 40 to 45 minutes, interspersed with comical advertisements and sometimes simple puzzles. 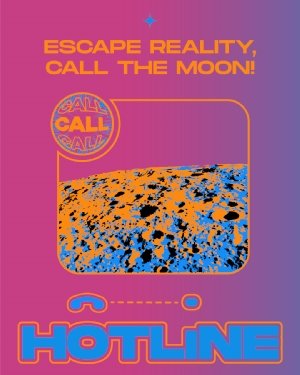 Despite references to Wikipedia, the research behind Hotline feels a little thin – no non-Americans here, not even the first woman in space – and several of the “choices” are simply instructions. As an entertaining, if superficial introduction to lunar travel for young adults Hotline works reasonably well but the sound quality is often poor and the journey might become confusing and peter out. Which mine did. And that may be because I made poor choices. You might make better ones. And you might have a better journey.

HOTLINE is an interactive theatre piece inspired by the legendary phone call from the White House to the moon between Richard Nixon, Buzz Aldrin and Neil Armstrong. HOTLINE uses the structure of a choose your own adventure story, where audiences can call in, and then make choices to determine how their experience unfolds, in reimagining the past and the future of the moon landing.

HOTLINE is a game and piece of theatre, where audiences are invited to solve puzzles with NASA’s Least Consulted Consultant Jerrie Cobb, play truth or dare with ambitious octogenarians, dream with the Almost Astronaut Ed Dwight, and hear from time-bending civil rights visionaries Ralph Abernathy and Gil Scott-Heron.

People are like swans. Hopefully, that’s got your attention and while you may be questioning my statement, it is true.  We all have a surface that we … END_OF_DOCUMENT_TOKEN_TO_BE_REPLACED

In case anyone in the audience didn’t know what a toilet looks like, a neon sign reading ‘Toilets’ hangs in between, well, two toilets. There probably … END_OF_DOCUMENT_TOKEN_TO_BE_REPLACED

Dolly Parton’s musical 9 to 5 sets out to do one thing: ENTERTAIN, and it does this superbly. The show has just started an extended tour at Wimbledon … END_OF_DOCUMENT_TOKEN_TO_BE_REPLACED

I feel so comfortable here in this large airy Church, seating is socially distanced and face mask compliance is at a level that some large West End … END_OF_DOCUMENT_TOKEN_TO_BE_REPLACED