It is the duty of every citizen to answer the call to support and protect the United Kingdom and its allies so last night, while the rest of the country were watching Eurovision, I went to off to a secret location, in east London, to join the ‘radio makers’ involved in new immersive experience Illicit Signals Bletchley. 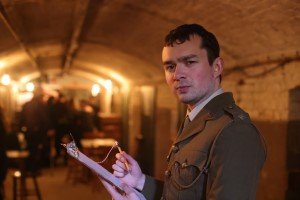 When I joined the RAF back in the day, one of the first things I did was sign a copy of the Official Secrets. That signature bound me for life – in fact, I’m not even sure I am allowed to say I signed it. However, I never expected to be asked to sign it again, but as I arrived at Bletchley Park, I was approached by Lt Tailor (Jaya Baldwin) who explained. No signature, no entry. Being the patriotic chap I am, I happily signed and entered the secret world of radio making.

And of course there’s not much I can tell you now. What I can say is that Writer/Director Christopher Styles and their team have obviously researched the Bletchley Park story and brought it to life with an authenticity that defies the imagination. Every detail from the clothing to a box of matches we found walking around is right for the early 1940s and adds to the believability of the experience. It was really easy to be sucked into the atmosphere, to the point where a couple of us were secretly discussing a person we thought was a spy and keeping an eye on them. What I loved about the narrative was not just the technical code-breaking side – I am now an expert on how the enigma machine worked – but also the human side of these people who lived and worked with each other in an environment of total secrecy day and night. Each of them has their own story from the person in charge Alfred ‘Dilly’ Knox (Al Barclay), down through the staff working in the different huts and areas of the Park. People such as Joan Clarke (Amelia Stephenson) a brilliant mathematician who can’t be awarded her degree, because she’s female and works closely with the stuttering, underconfident genius that is Alan Turing (Timothy Styles). 20-year-old Mavis Lever (Beth Jay) and her fellow Cottage worker Keith Batey (Gabriel Burns) and Hut 6 supremo Gordon Welchman (Sandy Murray). All individuals with their own stories both visible and hidden, and this production gives us the chance to get to know them personally.

According to the programme, the dialogue has been devised and improvised by the cast and that could explain why the interactions feel so natural and believable. Again, I can’t say too much but there is a lovely moment in the second act between Joan and Alan that was really moving and worked perfectly for the characters and for the story. In fact, as I’ve written this, the dual meaning of the show’s title has just hit me. Maybe code-breaking isn’t the career for me after all.

What more can I say? Well without breaking the Act, not much. I will say that if I were running a course on how to write and stage an immersive theatre production, I would be using experience Illicit Signals Bletchley as my template.

In true immersive style, as an audience member, over the course of the two-and-a-half-hour run, you will get out more than you put in. Getting involved is not difficult as you leave the 21st century at the door and walk down the steps into a world where war is not an abstract thought, and the country is on the brink of defeat. Remember that you are not just part of the process but are in the very heart of it. One final piece of advice, look around a lot, don’t necessarily take everyone and everything at face value and live the superb experience Illicit Signals Bletchley is on at the Crypt, St Peter’s Close, Bethnal Green, until the 28th May 2022.

Step back in time to 1940s Bletchley Park, a world of espionage, code-breaking and secrets. It was here that men and women, both young and old, cracked German codes and unveiled war-winning secrets, but these men and women kept secrets of their own, both from each other and the public.

Mechanical Thought is back with their hit show Illicit Signals Bletchley for another month-long run at the Crypt! Follow in the footsteps of real-life cryptologists as Bletchley Park goes through its most pivotal moment. Crack codes and decipher messages to uncover their private lives and make the tough decision of whether to keep their secrets or spill the beans.

When it comes to an illicit past; is it better to be honest or stay silent?

How far could you take a white lie?

Handel’s 1738 opera Serse (or Xerxes) is an exploration of power, love and human frailty. King Serse falls in love with the voice of his brother … END_OF_DOCUMENT_TOKEN_TO_BE_REPLACED

Lea Salonga has her fans. She also has some superfans, the ones who yell, “I love you Lea!” at almost every opportunity. If that wasn’t enough, there … END_OF_DOCUMENT_TOKEN_TO_BE_REPLACED

I have no hesitation in saying that the 1952 movie “Singin’ in the Rain” and its 1985 stage version is one of the greatest musicals of all time, … END_OF_DOCUMENT_TOKEN_TO_BE_REPLACED

There are, Maria Caruso was keen to emphasise in a post-show discussion, no wrong answers when it comes to responding to Metamorphosis or even … END_OF_DOCUMENT_TOKEN_TO_BE_REPLACED

Children of the Windrush generation, sisters Dawn and Marcia, grew up in the 1980s. In Roy Williams’ new play Dawn is shown struggling to care for … END_OF_DOCUMENT_TOKEN_TO_BE_REPLACED