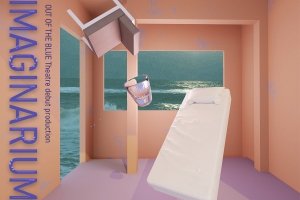 Early in the hour-long audio experience that is Imaginarium, the faceless narrator remarks ‘this sounds [too much] like a guided meditation,’ when inviting us to hear the sea lapping at our beds. The implication is clear: this isn’t a guided meditation. But if it’s not that, what is it?

I’m lying on my bed, in my own home, curtains closed and me clothed. I guess the bulky Bluetooth headphones indicate that I’m not going to settle down and sleep. I’m not just listening to a podcast. For one thing, this is being broadcast live – everyone who is listening is listening at the same time, together. So it’s a radio play? Perhaps.

I’m in my bedroom, as instructed. I’ve brought a half a glass of water, as instructed. As far as I can, I play along, and follow the instructions of what to do, where to go, what to say.

After a short preamble, a gong invites me in, and this sound will separate a series of loosely connected invitations. They all suggest ways we can use our imaginations to explore our rooms, our world, ourselves. And so, in one sense, the experience of Imaginarium is intensely personal.

I stood a mile up on the thousand-somethingth floor of a skyscraper; I travelled to the start of the universe; to the bottom of the ocean; back to age eight and the games we’d play to pass the time. I don’t want to spoil the experience, and yet I know it was my experience alone and it would be hard to preempt someone else’s imaginings.

I’ll admit, in the first half, there were times where I wasn’t certain I was ‘doing it right’. We look to the creative minds behind theatrical performances to do the imagining for us, and there were moments when I wondered if a group of consummate improvisers had mistaken everyone as having the same ease of imaginative creation as they do. Except that… this is something I could only have thought after an age stuck at home with only TV and film to watch. Because live theatre (remember that?) doesn’t show you everything in the same way as its filmed cousins. Every theatre performance, no matter how elaborate the set, invites its audience to suspend disbelief and imagine this is a real estate office or a windswept heath or a medieval court or the river Namada, flowing through India.

By the second half, I was swept away. Perhaps the art of this show, and its careful construction, lies in its precise pacing. By the end, I’m following the instructions to the letter, not as a burden but with the ease of someone who has been taught a new language to enable him to see the world through another’s eyes. Isn’t that ultimately what all theatre is trying to teach? This shared humanity, even at a time when around the world so many are having the same experience, but apart, is surely the theme of this well worth experiencing piece.

The year 2020 will always be remembered as the year of isolation. Over the past several months people from all over the world have spent more time alone in their bedrooms, than perhaps at any other point in their lives thus far. How are we supposed to deal with such a crisis?
How are people supposed to feel free in their hearts and minds when they are imprisoned in their homes? How can art remedy our suffering when it is under the same constraints? To begin to answer such questions we must start within the four walls of our minds. Out of the Blue Theatre invites you to discover a whole new universe within your bedroom in this audio-immersive theatrical experience. Lend us your ears, your time and most importantly your curiosity and step past the threshold of reality; step into Imaginarium.

I have seen some outstanding acting recently at the intimate Finborough Theatre, and this new play is no exception. The highly talented cast quickly … END_OF_DOCUMENT_TOKEN_TO_BE_REPLACED

In the pandemic (remember that?) I worked in adult social care. My role was to help older people in their own homes with daily tasks - I’d cook meals, … END_OF_DOCUMENT_TOKEN_TO_BE_REPLACED

The world-famous Wilton’s Music Hall and the children’s classic The Wind in the Willows make perfect bedfellows. Piers Torday has written a version … END_OF_DOCUMENT_TOKEN_TO_BE_REPLACED

Some journalists get, as it were, a bad press, though some of them don’t help themselves with some of the things they write and do. This play doesn’t, … END_OF_DOCUMENT_TOKEN_TO_BE_REPLACED

Paul (Lewis Bruniges) and Freddie Metz (Oliver Yellop), who identify as cousins, are so desperate to get out of the German Democratic Republic, … END_OF_DOCUMENT_TOKEN_TO_BE_REPLACED