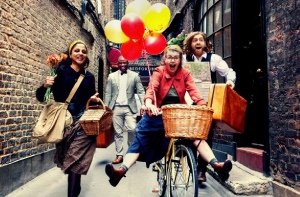 Interactive, immersive and promenade. Three words that when individually placed in front of the word theatre get me excited. However, if you add all three, then it’s time for something unique, and this was certainly true with Fire Hazard Games Underbelly production 80 Days – A Real World Adventure.

Following registration, I was emailed details on where we would be meeting and given a link to add details of my team, including at least one mobile number. Then, the day before we were due to attend, a text was received with more information and a link to the 80 Days website. Saturday afternoon, we turned up at the “Semi-Reform Club” to be met by Pendleton who explained the aim of our quest and sent us to find our first patron – in my team’s case, Hawkins, the botanist – who would provide us with more details, and maybe some money, and send us on our way. I’m not going to go into too many details as this is definitely an experiential event but the basics are that you have 80 minutes or so to wander around the Covent Garden area finding the answers to various cryptic clues so that you can earn money and buy things for the final journey around the world. You have a map, your phone and your wits to help you and that’s it. At the end, you return to the club, thinking it is all over but no, this is only the start of your journey around the world in 80 days.

No matter how well you may think you know Central London, solving the first couple of clues will prove you wrong. Someone has done a fantastic job of wandering around the Covent Garden area and finding odd and quirky things that are in plain sight but probably never noticed. I must admit to feeling a real sense of accomplishment each time my team – my friend Michael and I – solved a clue and gained some money. One bit of advice I will give future travellers is to think about what you are buying as you go through. 80 Days – A Real World Adventure is one of those games where every decision has a consequence later. One of my main criticisms about this type of production is that everything goes into the chase/hunt but then they fizzle out at the end. However, that is not true of 80 Days – A Real World Adventure, where what you thought was the end is, in fact, only the beginning.

The story is well written and delivered by the small cast (Nicholas Anscombe, Dominic Brewer, Hannah Cheetham, Kelly Long and Matt Vickery) who really throw themselves into their roles and look the part. They are really good at interacting with the audience/players, ensuring all the teams are engaged and nobody gets left behind – as we nearly did at the first question from Hawkins.

Like all, of these productions, everyone’s experience of 80 Days – A Real World Adventure will be different and you really get out of it what you put in. Discussing it as we went along and afterwards over a glass of something cold, Michael and I agreed that, although we didn’t win, we had a really great time. My one quibble was that the web site felt a bit clunky and, owing to the amazingly bad coverage in Central London, was slow at times, eating into the time allotted for the finding clues. Personally, I think an app that all the team players could log in to would have worked better but not being remotely technical, I’ve no idea how practical that would be. But forgetting that, 80 Days – A Real World Adventure was a very enjoyable, fast-paced, romp, that opened my eyes to many things I’ve often passed but never seen and kept me entertained and engaged from start to finish.

Based on Jules Verne’s classic adventure novel Around the World in 80 Days, Fire Hazard Games are staging a new, high energy urban adventure for adults in central London. Fire Hazard’s recent real-life immersive games include The Hunted Experience and John Le Carre’s The Circus. 80 Days: A Real-World Adventure is presented in association with Underbelly Festival Southbank.

The Reform Club has reopened the challenge to race Around the World in 80 Days and, this time, it’s open to all! Players are briefed by the Club’s wealthy patrons at a secret location in Covent Garden and have just 80 minutes to dash around central London to raise funds, make critical expedition purchases and decide whether to trust those who may help or hinder them along the way.

A theatrical adventure in both the virtual and real worlds, players will be guided through the game via a web app on their mobile phones, whilst also encountering a real cast of colourful characters as they make their way through London.

With a live leaderboard, cryptic clues, surprise challenges and multiple ways to win, the journey concludes with a race around the world at Underbelly Festival Southbank, guided by the cast and crew. This is a fast-paced journey unlike any other.