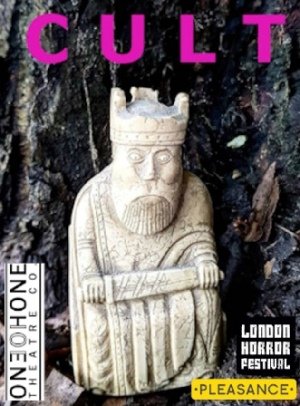 It is a cheap trick for a stand-up comic to tell the audience that they are great, but of course it works every time. Cheaper still for an audience member to declare this. But at CULT at the Pleasance Theatre we were a great audience. The secret, of course, to a successful immersive, interactive show like this one is that it’s down to the clever work of the cast to turn people who’ve arrived with no idea what to expect into active participants in their production.

The experience began before we entered the auditorium – no-nonsense Athena (pron. Ath-enn-uh) and all-nonsense Sheyna found their potential recruits waiting in the bar, and supplied green wristbands and stickers declaring, ‘Hello. My name is:’ I went with ‘Raccoon’ for the night. The name-tags were a sure sign we were in for a different sort of show.

Part corporate sales pitch, part hippy-dippy love-in, in CULT we were introduced to Rise (both the UK and international branches), learning their core precepts of Catch Yourself, Protect and Honour. The first ten minutes were played – well – for laughs, which led us into the experience in a way that raised my emotions and crept from fun to nervous to where-is-this-going? The interplay between Athena and Sheyna was a real delight, as they struggled to assert themselves in directing us to discuss the question of the day with other participants or to share our testimonials.

At each stage they used clever tricks to enlist audience members in driving forward the narrative. This left me at times unsure about who was a member of the cast, planted in the audience, and who were punters. In a couple of cases I was convinced until we left the theatre that they were members of the company.

Ceding control to the audience can be a daunting prospect, and there were times when it wasn’t clear whether an interaction was part of the storyline or not. While this is a sign of how well integrated the audience was with the show and how great we were / they got us to be, I couldn’t help but feel at times this missed the mark. The opportunity to rise from green wristband level to blue was dangled in front of us, and, without giving anything away, this led to a split in the group. It was clever and appealed to a primal competitive edge in some. Others were just as visibly eager to get no more involved in the weird community.

It’s a powerful game to play with an audience – forcing them into uncomfortable choices. What didn’t work for me was the lack of crisply-defined moments of decision, to bring into stark focus just how far off track we were being led. It felt a little bit of a chickening-out of what could have ended up a really spectacular performance that I’d remember for the long haul.

The direction the show takes each night is in part down to the choices made by the audience members. So maybe with a better audience than mine, we’d still all be there, dedicated converts trying to rise up the rainbow towards violet. Staging a sit-in and refusing to leave the cult.

CULT invites audiences to attend a secret meeting for the favoured few. Over 70 minutes, a smiling representative from RISE will induct you to an exclusive club that claims to empower its members. But some in attendance have serious concerns about who RISE really are and what they are hiding.

CULT will encourage interaction with characters throughout the show, meaning that audience members have the power to shape its outcome. Will RISE manage to gain a host of new and loyal members? Or will its leaders fall and the true purpose of the organisation be revealed?

CULT will run from October 14th-16th at The Pleasance, 9.30pm.
https://www.londonhorrorfestival.co.uk/