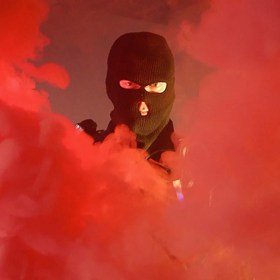 On Thursday Night, my friend and I were trying to blend in and not look suspicious inside Waterloo Station – the starting point for the latest installation of Colab Theatre’s Theatre experiences.

Colab Theatre market their work as immersive/pervasive theatrical experiences where each member of the “audience” takes a starring role. Before arriving we are given a list of things that we must do in preparation for the evening’s events: – bring: headphones, a phone with at least 8MB of storage available, ideally your phone will have a camera on it, an oyster card with at least 1 journey’s worth on there, comfortable shoes, clothes that you don’t mind getting dusty and do not bring a bag unless it’s a rucksack. We are also given a safeword – in case the events become too much and the adrenalin rush is making us uncomfortable.

We begin at 7.oopm and we both send our text message to a given number and wait. Our phones beep, we are being hunted. We are given a web link (works only on Android and IOS devices) and are told to download and listen to the secure audio file to learn our mission…. And we’re off….

Now, if you’re into role play, you are going to love this show, and thankfully I am. The show fed into my love of all things investigative crime and spy movies. I really did feel like I was in a live episode of Spooks! Now, it’s very hard to review a piece of theatre where the unexpected is paramount to your personal enjoyment of the experience, however, what I can say is that if you are prepared to really immerse yourself into the experience, forget your inhibitions and give in to your inner spy then the event is going to give you an amazing night out.

There is a small cast involved in the production, who you have will depend on what time you start your show. My friend and I started the show together at 7pm, by 8pm we were in a group of 6 and we remained in that group until the performance ended. All of the cast members we encountered were brilliant, they were convincing and allowed us to feel comfortable enough to enter into character ourselves and enter Colab’s world feeling safe and free to play along.

Without giving too much away, I’d say if you are claustrophobic, have any mobility issues, don’t like being scared and the feeling of being followed and chased, then maybe this isn’t the show for you, however, if you are the kind of person who loves role play, embraces the opportunity to SAVE THE WORLD, become a modern-day superhero, loves clambering around on your knees and quite wants to shoot a gun, then get your tickets for this show now.

Following their previous immersive show Crooks about the seedy London underworld, COLAB push the boundaries of audience participation in ‘pervasive theatre’. Audiences take on the starring role in their own action thriller as they’re chased by enemy agents, collect secret packages, hide and evade capture.

If you ever felt like you’re being watched, that’s because you are. You are one of the most important people in the world and yet you’ve managed to live a peaceful life. That is because we have been protecting you but now our protection has been compromised.

This two-part performance for audiences of ten-at-a-time takes the form of an undercover expedition in Waterloo followed by an adventure in London Bridge. Hunted is unique in its extremity as a show and pushing the fourth wall right into the very lives of the audience in an intense theatrical experience that involves being tied up, chased and interrogated.

Artistic director Bertie Watkins says: ‘Immersive theatre is growing up. We created Hunted to put audiences in the middle of a narrative. It’s a low cost and intense show that makes the world evolve around audiences for an evening, rather than paying £75 to be part of a crowd. Every person that comes through the door is focused on; they have as much of a role in the story as the actors performing in front of them.’