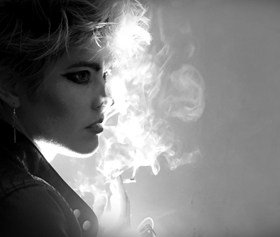 It certainly wasn’t Professor Plum with the candlestick in the ballroom, but that doesn’t mean that something sinister didn’t happen the night Rusty was last seen alive! The old factory just off Borough High Street seems unassuming, but when you knock for entry, make sure you’re ready to jump in feet first because once you’re through the door, you’re in!

In 1983, in a derelict rug factory, Rusty is seen alive for the last time after a pretty wild party. 33 years later his body is discovered and his old band mate Jack is under investigation for his murder. Desperate for the truth, Jack realises that the only way to really know what happened to Rusty is to ask those who were there; the only problem is, they’re all dead! With the help of Magpie who has a penchant for speaking to those who have passed on, we, the investigative journalists, are given the opportunity to revisit the events of 1983 and attempt to uncover the truth.

A CoLab Factory production, written by Rosanna Mallinson and David Knight, the twists and turns of Death of the King are sinister, complex and infectiously engaging. The mix of immersive experience and time for group contemplation is well balanced and ensures that the production maintains the enthusiasm and intrigue of the audience for the full duration of the piece.

Driving the journey from first arrival to grand reveal is Eric Colvin, who’s adaptability and quick responses to some rather curly questions from the group demonstrates superb versatility and focus. He is supported by director Rosanna Mallinson (Magpie) who also serves as our guide in the basement of the factory. All in all, the management of the groups is efficient and well-coordinated, however there was quite a lull as we waited for the initial story brief. Perhaps briefing the groups collectively or providing additional stimuli at this point would ensure that energy doesn’t drop.

Without giving too much away, the action below the land of the living is everything an immersive experience should be. The layout of the space is well designed and vital props are included in subtle ways; you feel quite intrusive looking through a drawer or picking up a bottle when someone is half asleep in the bed next to you! Initially it is somewhat difficult to hear detailed conversations however this is largely due to the music and is a worthwhile trade-off to maintain the atmosphere and sustain the immersive experience. While you can’t hear everything, you hear what you need to hear.

The commitment to character and versatility exhibited from the ensemble cast is exceptional to say the least. It’s quite difficult to gain a full appreciation for each and every performer when so much is dependent on your individual journey throughout the piece, however for me highlights came from Christi Van Clarke in the role of Bex and William Frazer in the role of Rusty. Clarke’s anguish and deteriorating sense of control demonstrates an honesty and sincerity within the piece that instantly resonates with audience members. In contrast, the brash and obtrusive Rusty, played by William Frazer, manages to transition from brazenly dangerous to somewhat relatable in such an organic way. For me personally, his steely gaze, issuing a blatant challenge to anyone game enough to hold it, was clear testament to his comfort in the role and the extent to which he enjoys ‘playing’ with audience members.

Jenny Wills in the role of Suze provided one of the most inviting experiences, chatting quite comfortably to the group and gaining our confidences with ease. The remaining characters, played by Daniel Reed and George Eddy, are quite the opposite and provide the greatest challenges in their apparent disregard for our questions. Evasive and openly confrontational, the two ensure that audiences are unable to rest on their laurels and are pushed to find new angles and approaches.

In the basement of an abandoned rug factory, deep under the streets of London, a psychologically-thrilling immersive mystery awaits you.

It was from this building, a derelict squat at the height of the punk movement, that Rusty disappeared in 1983.

Rusty’s disappearance was never investigated. The ravings of his previous housemate, Alex, about a body in Borough fell on deaf ears. They were dismissed as the incessant ramblings of a ‘madman’ and confined to the asylum where he lived.

Rusty became a vague memory, a forgotten secret, until now…
33 years have been and gone since that night. A body has been uncovered. Jack an ageing rock star and actor who was at that party, has come under suspicion. In a bid to protect his public image and clear his name he has hired the expertise of a rather unusual individual, one who specialises in “resurrecting” forgotten things.

Jack invites you to become part of the story, bringing you back to that fateful night; the last time Rusty was seen alive. Unlock secrets, expose lies, and try to seek the truth about what really happened.

This is a murder mystery like no other, and not for the faint of heart. Be prepared to learn more about yourself than you thought possible in this fully immersive theatrical performance. Expect Sex, Drugs, and Rock and Roll

From Immercity, the creators of Suicide at Vine House, Alchemical Door, Wyrd, The Three Rings of Cirque Tsuki
and more.