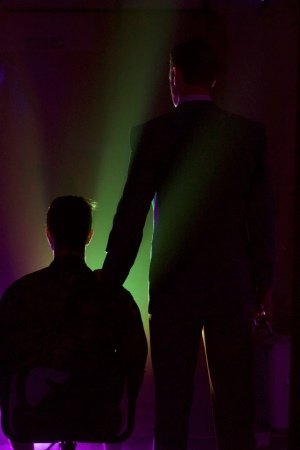 Spy City is immersive theatre meets escape room: but does it deliver a bigger punch than each of these alone?

Escape rooms are already taking the sense of agency, so important in immersive theatre, one step further. They place participants right in the centre of the action. This production aims to blend the two: full agency with a strong story carrying it through. If you’ve never been to either then it’s worth knowing that you shouldn’t expect to sit down and watch this show. Instead, anticipate running around, solving clues, finding yourself in places and situations you wouldn’t normally be in. And be careful who you trust.

It would spoil parts of the show to let on much about what happens in the two hours. Once I’d signed up as a spy, I received a cryptic instruction with a location, a number to text once I reached it, a (hefty) responsibility waiver and a safe word to utter if things got too intense. After that I was on my own.

Once inside the first venue I was given a refresher about my safety and a reminder that some of the event – half-theatre, half-game – takes place outside. When we head out of the building the roads will be real. The cars will be real. They don’t want us to get hurt in a confrontation with things beyond their control, but also don’t want the blame if we do. The warning turns out to be sensible and appreciated: I am sucked into an alternative world, laid on top of London Bridge. Here, strangers might be friends or foes and I need to work hard to remember that if I feign illness to cause a distraction for my fellow agents to use, oblivious passers-by might rush to my aid. The effect is heady, paranoiac and exhilarating.

The use of locations achieves a world where secrets could be around any corner. While it’s easy to forget that this world is just a stage-set in which the story is evoked, it’s the mastery of the actors that makes this so. On occasion, they might be reciting memorised lines, but the bulk of the time they are improvising and reacting to what this particular group is saying or doing. Each time there was an open-ended decision it felt like we could take the story in any direction we wanted, adding to the feeling of agency and that the world was much bigger than the corners of it we were seeing.

On a couple of occasions, unfortunately, technical issues held us up. Rather than feeling like I was inside an integrated, fully-functioning machine, I got a glimpse of the manual workings of humans squirrelled away behind the scenes. This jolted me out of the illusion, which was a shame in an otherwise slick production. At times there was a little more direction from an actor than escape room veterans would expect from a genre that is all about empowering the participants. It’s a reasonable trade-off for a more story-driven experience, and companies are still experimenting to find the sweet spot for audience interaction vs lean-back enjoyment.

This isn’t a show for the faint-hearted, and much depends on joining a group that are up for getting into the experience. But go expecting something a bit different and run with it. This is the closest you’re going to get to being a spy in a futuristic-thriller. I found myself looking at the world a bit differently. And had to remind myself that the cars were real.

This intimate, action-packed three-part performance starts in an exclusive spy members bar where you discover/uncover/reveal your true identity and begin your new life as an elite agent. Go on an undercover mission around London Bridge to find the safehouse. Break-in, rescue your fellow agents and see if you have the guts to escape.

SPY CITY is unique in its extremity as a show and pushing the fourth wall right into the very lives of the audience. Audiences have to tail agents, invade capture, get tied up and interrogated – this is pervasive theatre – not immersive theatre.