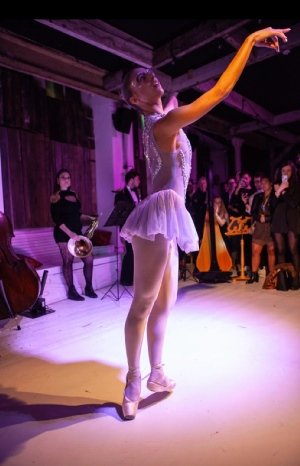 There are staples of Christmas theatre: pantomimes, Dickens, picture book adaptations and, of course, The Nutcracker. There’s joy in the familiar, but also a sense of stasis – cycles repeating and not moving forward. Vox Vanguard’s production revels in the former while firmly rejecting the latter: this is The Nutcracker reimagined.

Firstly – the setting. It’s not immersive, per se (a label everyone seems to want to attach to their productions these days), but in the round, making use of the space without any barrier between audience and players. We lounge in the atmosphere of a salon, the space oozing with charm and delicate touches of modernity. Traditional German figural nutcrackers stand on tables beside flickering LCD candles. A video projection animates as a backdrop, and is put to good, subtle use throughout the performance to transport us to different places in the story.

The plot, such as the production concerns itself with one, is delivered from the capable hands of Adam Perchard’s Drosselmeyer, a queer interpretation of the toymaker that focuses on the creepy but attractive side of a character who forms the world to his will. Dancers, acrobats, and an orchestra, which is the opposite of one hidden away in a pit, conjure up a world of fantasy that beguiles and has the audience standing and craning their necks to catch every movement. I find myself utterly charmed.

We are a world away from both the bustle of real life and the refined stuffiness of a grand ballet. It is raw and visceral, performers right in front of us, between us, draining our glasses and drunkenly swaggering back to their spots. Nothing is off limits. It challenges as it enchants, forcing me to rethink my impression of the ballet and get back to the story itself. In doing so, it could so easily have forgotten to respect the beloved score, but to Vox Vanguard’s huge credit, the classical performances are top notch: lively but precise interpretations of (excerpts from) Tchaikovsky’s masterpiece.

Mention must also be given to the diversity of the cast – an aspect in which ballet, like so many parts of the theatrical world, is trying hard to better reflect society but not always succeeding. All are welcome here, and for a night we can set aside our concerns and enter a dreamworld without conflict.

Act 2 firmly diverges from tradition, thanks to the booming jazz vocals of Georgia Crandon. The whole production speeds to a climax and is over before I am ready – always a good sign.

Matthew Tosca has created something refined and exciting, which is familiar yet challenges us to dream bigger. The whole cast and crew deliver something spectacular, in every sense.

Step into a world of imagination and fantasy where toys, nutcrackers, tin soldiers, dolls, sweets, flowers and snowflakes are walking, talking, drinking and dancing; finding the magic and mysticism right within our own world.

At the Hoxton Docks, Vox Vanguard re-imagines one of history’s most celebrated classics, The Nutcracker, to kick-off the festive season. In a world-premiere cinematic and immersive re-orchestration, Vox combines various art forms and music genres in an abridged and contemporary re-telling of Tchaikovsky’s most famous work.