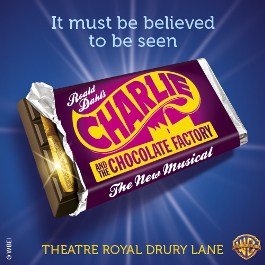 Some of the early reviewers of Sam Mendes’ mega-budget musical adaptation of Roald Dahl’s Charlie and the Chocolate Factory felt that he had perhaps overlooked the storytelling and emotion due to a focus on mind boggling sets, magically expanding costumes, and technical wizardry. Two years into its run, the innovation on the stage remains astounding, but the show has also developed a heart, for which credit goes to its fantastic cast.

I was particularly impressed with the acting and vocal talents of Jake Poolman, playing young Charlie Bucket on the night I saw the show. Throughout the first act, Jake establishes Charlie as a kind and thoughtful dreamer with the gift of making something out of nothing: a useful talent in a family where cabbage soup rations are shared between seven, the roof leaks, and there isn’t even enough money to buy Charlie a Wonka bar for his birthday. Jake’s Charlie is so likeable that when he finally lifts up a golden ticket, I couldn’t help but shed a tear.

They have in my opinion the best musical number of Mark Shaiman and Scott Wittman’s score: “The Amazing Tale of Mr. Willy Wonka”, a deliciously dark introduction to the factory owner, which is accompanied by terrific projections designed by Jon Driscoll and choreography by Peter Darling (Billy Elliot The Musical; Matilda The Musical). Meanwhile Charlie’s mother and father (Lara Denning and Derek Hagen) work round the clock to try and earn enough money to buy another cabbage for supper and sing dolefully about Charlie’s missed opportunities.

Finally, after the interval, the fun really begins. While the journey into Willy Wonka’s chocolate factory begins the moment you step into the foyer of the Theatre Royal: with a candyfloss stand, a popcorn maker, and smiling ushers dressed in Cadbury’s purple, it’s a mere appetiser to set and costume designer Mark Thompson’s lavish creations behind the factory gates. Explore a sugary wonderland of chocolate rivers, marshmallow pillows, six-foot squirrels ridden by two-foot oompa loompas, and great hulking Heath Robinson-esque machines that spit out every-flavour everlasting gobstoppers. The sets and projections move the story seamlessly from the Bucket shack to outside the factory, inside the factory, the Chocolate Room, Inventing Room, Nut Room, TV Room and up and out into the glass elevator.

Mendes’ production is like stepping into a theme park, and has something for anyone. Luckily, you don’t need to find a golden ticket to experience the magic for yourself!

When Charlie gets to win a golden ticket to the weird and wonderful Wonka Chocolate Factory, it’s the opportunity of a lifetime to feast on the sweets he’s always dreamed of.

But on the far side of the gates incredible amazement awaits him, as down the sugary corridors and among the incredible edible delights, the five lucky winners find out not everything is as sweet as it first appears to be.

Theatre Royal Drury Lane
Address: Catherine Street, London, WC2B 5JF, United Kingdom
Evenings: Monday to Saturday 7.30pm
Matinees: Wednesday and Saturday 2.30pm
Age Restrictions: Charlie and the Chocolate Factory is recommended for a general audience. The show is suitable for children aged 6 and over. All persons entering the theatre, regardless of age, must have a ticket. Babes-in-arms will not be admitted. All children must be old enough to occupy their own seats.
Previews from 22nd May 2013
Opened 25th June 2013

Shoes, one would have thought, are fairly recession-proof. The problem for Charlie Price (Joel Harper-Jackson, reprising the role he previously played … END_OF_DOCUMENT_TOKEN_TO_BE_REPLACED

The descriptions of what happens in this show are so vivid that paradoxically they leave nothing to the imagination – and, at least at the performance … END_OF_DOCUMENT_TOKEN_TO_BE_REPLACED

Although not entirely perfect, this staging – the first ever in the UK – of Pablo Sorozabal’s Zarzuela (Spanish Operetta) is brilliant, atmospheric, … END_OF_DOCUMENT_TOKEN_TO_BE_REPLACED

As theatre productions go this is a memorable, magical experience filled with heart and love and so many tiny thoughtful details, that I’m not sure a … END_OF_DOCUMENT_TOKEN_TO_BE_REPLACED