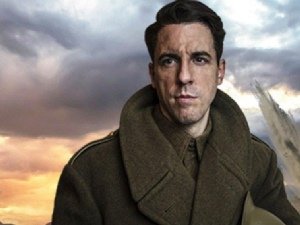 I am reminded of a particularly fastidious taxi driver taking me home one night who said that he felt Britain had an unhealthy obsession with the Second World War, in the sense that the victories of the Allied forces had become somewhat romanticised. There’s not a shred of that in In Loyal Company, which doesn’t focus so much on the politics surrounding wartime events but instead tells a deeply personal story. A strong rapport with the audience is quickly established, even if it is slightly odd (at least to begin with) that a wartime play would have quite so much humour.

Arthur ‘Joe’ Robinson (David William Bryan) comes across as a likeable figure. The script is, according to its notes, “based on a true story, but also contains fictional characters”, though all of it, whether made up or not, is thoroughly convincing. The performance includes generous doses of physical theatre – Bryan puts every cell in his body into portraying the horrors of the battlefield and the rather rudimentary medical treatment available. The toll, both physical and psychological, taken on the character becomes palpable – not just in his ever more persistent coughing, but in changes of behaviour. It’s a tour de force performance, with swift costume changes aided by having everything required for the show in an on-stage trunk. A fascinating and absorbing experience.

In Loyal Company is the incredible true story of missing World War II soldier and Prisoner of War Arthur Robinson, written and performed by his great-nephew, David William Bryan.
May 1941. Hitler’s bombs rain on Liverpool. Local packer, Arthur Robinson, joins up becoming a private in the 18th reconnaissance division.  Deployed to Singapore, his ship is destroyed by Japanese dive bombers on arrival. Arthur is declared missing. This extraordinary true story of survival is a tour-de-force war epic.

Everyone’s vexed in this show, though some have clearer reasons to be than others. Mrs Driscoll (Tameka Mortimer) is struggling with a home life that … END_OF_DOCUMENT_TOKEN_TO_BE_REPLACED

The penultimate production of the 2021 Tête à Tête Opera Festival, based at London’s Cockpit Theatre and showcasing contemporary and avant-garde new … END_OF_DOCUMENT_TOKEN_TO_BE_REPLACED

Relatively Speaking premiered in 1967 and is the sort of show that is, by contemporary standards, very much of its time, and not just because of … END_OF_DOCUMENT_TOKEN_TO_BE_REPLACED

For those who don’t know, MARIO is the title character of the bestselling video game franchise of all time, which began in 1983. These days he is an … END_OF_DOCUMENT_TOKEN_TO_BE_REPLACED

Al (Cameron Corcoran) has managed to bring company home with him. His wife, Louise (Polly Waldron) didn’t get so much as a text message in advance of … END_OF_DOCUMENT_TOKEN_TO_BE_REPLACED