Home » Reviews » Innocence at The Bread and Roses Theatre

What is one supposed to think when a teacher, Andrew Vines (Malcolm Jeffries) offers a schoolboy (Theo Watt) his personal mobile number (that is, not a phone number provided by his employer) so that the boy doesn’t have to go through official channels in order to communicate with him? The events in question took place between 2011 and 2013, but it is not so much the exchange of numbers that creeped the boy out, but rather what was actually communicated. The play doesn’t specify whether it was crucial that the boy was so unnerved by the messages he received that he deleted them: did he also delete the evidence that might have helped the case for the prosecution? 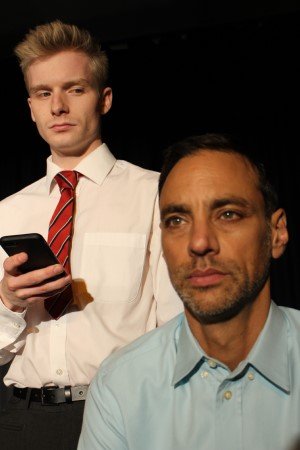 The details the audience is supplied with make for interesting cases on both sides. According to the National Society for the Prevention of Cruelty to Children (NSPCC), “Grooming is when someone builds a relationship, trust and emotional connection with a child or young person so they can manipulate, exploit and abuse them.” Vines is adamant he wasn’t doing anything of the sort, and indeed, as his solicitor argued, do the police actually have any concrete evidence of abuse or mistreatment with which they could feasibly press charges?

Remarkably balanced accounts from both teacher and former pupil reveal how perceptions can lead to conclusions that are entirely feasible, and yet not necessarily correct. Early on, the boy points out that there is always a teacher who would stand close to the showers whenever they were being used after sports practice. Later, recalling a specific occasion, he felt Vines was deliberately watching him shower (and him alone) – but was he just doing what he usually does as part of the school’s routine?

The questions keep coming whenever either man (the boy isn’t a boy now, having graduated from university and held down a job in the charity sector) has something to say. But the production is careful not to cover the exact same ground repeatedly, unlike the rounds of questioning Vines says he faced, from his own legal counsel as well as the authorities. Both parties find sanctuary at their parents’ homes, though the ex-pupil’s home life was far from ideal, at least in his mind.

To every line of argument, there is a strong counterargument, but I suppose the production’s challenge to the audience is to consider which set of arguments is more credible. I don’t side with either party, but rather with Vines’ solicitor: whatever actually went on, whoever said what to whom, hasn’t actually resulted in anything that could convince judge and jury to put Vines behind bars. That isn’t to say the ex-pupil is incorrect, insincere or immature, although neither side is entirely blameless.

What brings the ex-pupil to finally go to the authorities is explained in the narrative. Even so, could he have not approached another teacher if he had concerns at the time? As for the production, it’s a steadily paced play. Occasionally it’s unnecessarily slow – did the audience really have to sit there watching Vines get dressed, with no other stage action or dialogue of any kind? This show raises far more questions than it answers, even if it highlights police incompetence more than anything.

Strenuous efforts are made to maintain confidentiality during the police investigation, but the lasting damage from this whole sorry affair on both sides is plain to see. The production does well to give a platform to the accused party, in a world that seems to overemphasise allegations of misbehaviour irrespective of whether they have been substantiated. There really are two sides to every coin in this thoughtful and provocative piece of theatre.

Innocence examines the impact of an allegation of grooming on both the accuser and the accused. In the age of the #metoo movement and when safeguarding our young people has never been more paramount, this timely play presents a fictitious situation and allows you, the audience, to decide with which character (if either) your sympathies lie once you have heard both their accounts.

The Bread & Roses Theatre
9th – 13th November 2021 at 7.30pm
Running time: 75 minutes
Please note: This production contains strong language and themes of an adult nature. We recommend that audience members should be over the age of 15.

If the audience were to be exposed to full versions of the seventy-four songs listed in the programme, it would be a very long show indeed. I suppose … END_OF_DOCUMENT_TOKEN_TO_BE_REPLACED

How can a play be both charming and devastating? Through its tight script, abundant humour and pitch-perfect performances, 4th Country manages to … END_OF_DOCUMENT_TOKEN_TO_BE_REPLACED

Britain, so a London cab driver once told me, is obsessed with the Second World War, as though it happened just recently. Power Luncheon would seem, … END_OF_DOCUMENT_TOKEN_TO_BE_REPLACED