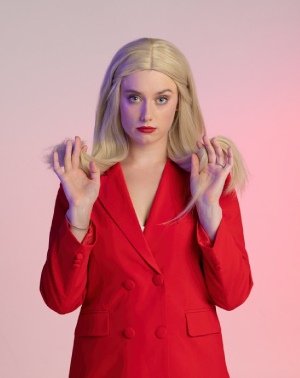 The daughter and second child of President Donald Trump and his first wife Ivana, Ivanka (McLean Peterson) doesn’t get that much publicity with her father making the news on a regular basis, fake or otherwise. “I’m waiting,” is her opening gambit. Where and for whom? It doesn’t take long to work it out, especially when one of the (off-stage) members of staff at the White House tells her she can’t go into the Oval Office right now. And almost everything is ‘daddy’ this and ‘daddy’ that, with fewer references to her husband Jared Kushner.

I was reminded of a satirical report about a reading the former Prime Minister David Cameron gave in church. It went something like, “Mr Cameron read from the Gospel of St John. He said, ‘In my father’s house are many mansions.’ After he had said this, he began to read from the Gospel of St John.” Here, Ivanka forces herself to admit that she is driven around rather than taking to the wheel herself, and there are few places in the industrialised world that aren’t far from one of ‘daddy’s’ miscellaneous properties.

There’s talk of golf courses and the various other activities that occupy her time, together with some disagreements she has had with her father over policy, notably about migrant families being separated at the Mexican border. But she is overruled, and for taking the trouble to point out the obvious, Ivanka is rewarded (for want of a better word) with yet more cash and nice things. While there’s little, if any, humour to be found in the recounting of such conversations, Peterson nails the mannerisms and personality perfectly, including the upward inflection at the end of sentences and losing her temper at what are distinctly first world problems.

If it’s rather vacuous and shallow, what was one supposed to expect? Anything less wouldn’t have been convincing. A striking portrayal of someone in an extraordinary position of privilege, this play is an interesting take on the presidential family.

She’s hot, rich and f*cking powerful. She knows bad things are happening. But she’s making millions selling her line of shoes at Bloomingdale’s, Jared’s voice is as soothing as ASMR and her kids keep her busy. Does she have the balls to shape the future? A dazzling meditation on heroism starring an alternate version of America’s first daughter, from multi-award-winning NYC company Snowy Owl.