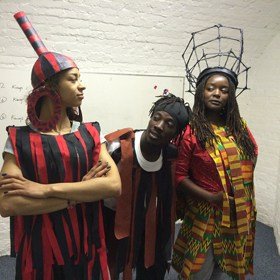 The beauty of The Green Stone Bead lies in its theatrical simplicity – and its rather more complicated background. At a rudimentary level, the story has its parallels in the quest of the Holy Grail, or even Lord of the Rings: an exhaustive and exhausting team search for a particular object that, when captured, brings lasting peace and prosperity, and much more besides.

It was once explained to me that most shows are like icebergs. What the audience can see is around 10 per cent of the whole process. What is often not revealed is the 90 per cent below the surface.

The IROKO Theatre Company decided to expose some of the other 90 per cent in the form of a pre-show exhibition, a resource pack, free of charge (which I initially thought was a programme), based on the findings of their ‘Our Shared Heritage Project’. This was a Lottery funded initiative that looked at African deities, folk stories and objects of historical significance such as swords, hats and beads, and their parallels in other cultures. Hence my earlier comparison between their production and the Lord of the Rings!

The story, interestingly, is deeper than good triumphing over evil. Every millennium the green stone Bead changes hands between the gods of the river and the gods of the sky, as part of an eternal arrangement drawn up by Olodumare, ‘The Creator’. But as it’s now been 1,014 years, the Bead must be taken, on the Creator’s instructions, from the sky gods, by force. Skygod Head Office (or whatever the ‘other place’ was called) has its benevolent reasons for retaining the Bead, declaring “the living cannot look after the destiny of humanity” – and it is left to the audience to work out whether they are being protective of the human race or just plain ridiculous.

The eventual obtaining of the Bead pleases Olodumare, who calls for a huge celebration for the restoration of equilibrium to his universe. There are enough twists and turns in the narrative to justify the big Broadway-style ending. Not since I attended a performance of Hair at the Gielgud Theatre in 2010 have I seen such a display of members of the audience taking to the stage. The big dance was kept simple enough for everyone to follow – and yes, there is a little part of me that regrets remaining seated! And while actor-musicians have graced the London stage before, The Green Stone Bead goes one further, presenting the musician-actor, as a percussionist takes on the role of the Creator.

The IROKO Theatre Company also has a workable answer to the perennial problem of eating and drinking during performances that so many theatregoers find distracting. Offer food and refreshments after the show. So impressive and yet, so simple. I had to rush off to another show so my sampling of West African delicacies will have to take place on another occasion. But if every West End theatre bar opened for 30 minutes (per se) after performances, would we see fewer people munching their way through a play?

This performance was the last in the current tour, but IROKO is hopeful that arrangements can be put in place for a second tour. I hope it works out – it’s a fantastic piece of what they themselves describe as ‘black theatre’. This tasteful, family-friendly musical is well choreographed, well directed and well performed. There is some excellent use of projections, used sparingly but effectively, giving the audience clarity as to setting and location, but not to the point of leaving nothing to the imagination. The projections and the dialogue work together to draw the audience into the story, and I found myself very much engaged in what was going on.

If the audience were to be exposed to full versions of the seventy-four songs listed in the programme, it would be a very long show indeed. I suppose … END_OF_DOCUMENT_TOKEN_TO_BE_REPLACED

How can a play be both charming and devastating? Through its tight script, abundant humour and pitch-perfect performances, 4th Country manages to … END_OF_DOCUMENT_TOKEN_TO_BE_REPLACED

Britain, so a London cab driver once told me, is obsessed with the Second World War, as though it happened just recently. Power Luncheon would seem, … END_OF_DOCUMENT_TOKEN_TO_BE_REPLACED