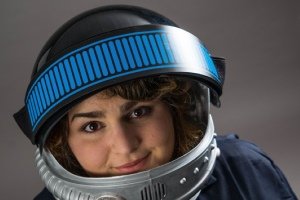 There’s a warmth and pleasantness in Isa Bonachera’s performance that only occasionally turns just a little bit unkind. Such is her dislike of a certain kind of urban cyclist (you know, the ones who are colour blind to red lights) that when she dies, she’d like to be cremated and have her ashes thrown into the face of a passing ‘Lycra lout’ (my choice of phrase). The Great Emptiness begins with one of those helmets that astronauts wear, and as Bonachera points out, she only really uses it at the beginning – I assume because it’s difficult to be heard, even with the aid of a microphone, when wearing the (admittedly impressive) headgear.

In Presbyterian Scotland, Bonachera’s digs at her Roman Catholic upbringing go down well with the audience, including the notion asserted by nuns at the Catholic school she attended that adverse weather conditions happen because God is angry at homosexuals. It’s the power that gays cherish most preciously, her deadpan manner sardonically asserts, to “control the weather”. The video projections (and those of still images) have much to add to the show – well, Bonachera could have stood there and explained what a black hole looks like but what would be the fun in that?

Not being a film buff, some of the movie references went over my head, but a witty analysis of a futuristic music video had me in stitches. Her love of the universe and of what lies beyond this planet is palpable throughout the show, which captures the highs and lows of her life to date – the former involved a stint working at the Large Hadron Collider (or, as some other comedians have been known to call it, the Large ‘Hard-on’ Collider), and the latter involved being on her own doing night shifts in an observatory operating machinery that has since become automated.

There aren’t very many topics in the vast array of Edinburgh Fringe that in themselves can make a show stand out from the crowd. Some of the punchlines in the show are rather unexpected, and the audience is never entirely sure whether something is being presented as an unembellished fact, a mere joke, or both. Either way, who knew science could be so fun? A charming and distinctive show.

The Great Emptiness is the real-life story of 2018 BBC New Comedy Award finalist Isa Bonachera and her quest to go to space. Join Isa for a thought-provoking and unapologetically dark hour of offbeat comedy about the universe and broken dreams.

Isa Bonachera: The Great Emptiness
A stand-up show about impossible dreams and the weirdness of the cosmos.

Britain, so a London cab driver once told me, is obsessed with the Second World War, as though it happened just recently. Power Luncheon would seem, … END_OF_DOCUMENT_TOKEN_TO_BE_REPLACED

William J Dunleavy, author and star of this monologue play, is a writer and face to watch. He enters the room (as the staging is more geared towards … END_OF_DOCUMENT_TOKEN_TO_BE_REPLACED

Cirque du Soleil’s Luzia is a joyful whirl through a psychedelic Mexico, which reminds us why live theatre is so special. Anyone who goes to … END_OF_DOCUMENT_TOKEN_TO_BE_REPLACED

I am always very excited to come across a new theatre, and Esher Theatre is a real ‘find’, conveniently situated near to Esher High Street and right … END_OF_DOCUMENT_TOKEN_TO_BE_REPLACED

Cecil Sharp is no unsung hero. Without the energy of this driven and at times prickly musician, the traditional folksong of rural England would very … END_OF_DOCUMENT_TOKEN_TO_BE_REPLACED