Home » Reviews » Isaac Saddlesore and the Curse of Nebet – Review 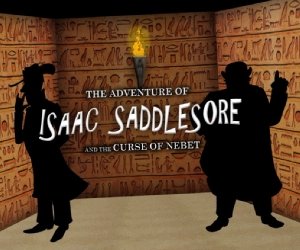 There’s something about the sheer silliness in Isaac Saddlesore and the Curse of Nebet that is rather welcome, 2020 having already turned out to be the year that it has been. There are also a sufficient number of twists in the plot to maintain interest, though at times one wonders if the storyline is subservient to the humour. Set in 1906 and with a sustained amount of risqué behaviours exhibited by George Hotbuns (Roger Parkins), it would be easy, in some respects, to dismiss the whole thing as outdated and misogynistic. But beyond the surface level, both the self-styled Dr Hotbuns and his detective friend Isaac Saddlesore (Lewis Allcock) more than meet their match in Lady Beatrice (Lucy Gape). Without giving it all away, it was rather amusing to note that on more than one occasion, the narrative only advances by way of Beatrice plainly stating that X took place, and then Y, and then Z.

The detective duo seems to believe every word of what she says, though I hasten to add they are happy to change their minds as new information comes to light. Efforts are made to make this a period piece, with smartly dressed characters, including a Dr Bogle (Callum Hale) who actually does the rounds like local doctors used to, and the sort of clever vocabulary that used to be deployed in theatre plays before ‘eff, cee and effing cee’ became relatively commonplace both in society and therefore on stage. The result is a nostalgic atmosphere.

Adalia and Thaddeus (both Charlie Keable), sister and brother of Beatrice’s late husband Augustus have personal matters that stretch beyond the typical sibling rivalry, unresolved at the time of Augustus’ sudden passing. The detectives (and to some degree the audience) must determine how much of the bickering, and the surrounding issues, has any relevance to the case under investigation. Perhaps predictably, the ‘curse’ of the show’s title becomes so pervasive – and unbroken – that there isn’t a character left who hasn’t been affected by it in some way by the time the credits roll. Less predictable is how some of them end up.

Some of the putdowns are close to the bone – Saddlesore’s initial dismissal of Beatrice as “you poor depraved Northerner” at least acknowledges, albeit implicitly, that there are other sorts of Northerners – and one of Hotbuns’ published books is called ‘She Was A Wife While At Home But A Goer In The Barn’. The production is a mix of pre-recorded and live dialogue (either that or the cast are capable of costume changes at the speed of light) and the pauses, where they exist between scenes, are, I would estimate, no longer than they would be at a pub theatre performance.

There are challenges to be overcome in staging a digital performance, but this production rose to the occasion. It may not have been the slickest show put out there whilst the theatres remain closed, but it certainly has a lot of gusto. A lovely bit of escapism in these difficult times.

A collector of architectural artefacts is dead – but is it murder, or is it the dreaded curse laid on the sacred Statue of Sekhmet claiming the lives of tomb plunderers? Only one man can find out, unfortunately, Sherlock Holmes isn’t available, so it’s down to Isaac Saddlesore and his long term lodger and lech; Dr George Hotbuns to crack the case!
We’ll be performing our little guts out for you from our homes to yours. There’ll be laughs, there’ll be intrigue, there may even be arousal, who can say?