Home » Reviews » Jeff Wayne’s The War of The Worlds: The Immersive Experience 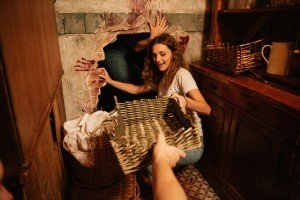 Riddle me this. What do you get if you mix a terrifying 19th-century novel, with a ground-breaking 1970s album and the latest in 21st-century theatre technology? You get Jeff Wayne’s The War of The Worlds: The Immersive Experience which, after a year or so of cancelled performances, I finally managed to visit.

The experience starts as you walk through the door, check-in and get your coloured wristband, and enter ‘The Spirit of Man’, a steampunk-themed bar and restaurant dominated by a huge Martian. Now, it’s worth getting to the venue a bit early. Not only can you fortify yourself for the experience ahead with a glass of something cold, but there is plenty to see. I really recommend wandering over to the back wall to not only see Mr Wells himself but a couple of highly interesting, animated pictures. We were alerted when it was our time to enter the experience, so my companion, Michael, and I joined the others in our group. A quick word on sizes here. Groups are normally capped at 8 or 12 which is the ideal number to ensure everyone gets a first-rate experience.

As we stood in giddy anticipation, the door opened and we were taken into the world of the Martian invasion of 1898 where we were going to meet our guide, journalist George Herbert, who had lived through those days, so knew what they were talking about. We walked forward, the door closed and, at this point, I’m going to stop talking.

Well, I’m not obviously. I am however not going to give you any more details about the next two hours. What I can tell you is that I had the most marvellous time. The team behind War of the Worlds has used every trick in the book to give their guests the most authentic experience possible. If you haven’t read HG Wells’ book, then worry not, as, unlike every adaptation I’ve seen before, Doreen Wayne’s adaptation sticks very closely to the original, and enhances it in ways that I think would impress HG Wells. Pair the writing with Jeff Wayne’s album and you are already set for an amazing audio experience. However, Creative Director Carl Guyenette and Director Jack Pirie is a mixture of amazingly authentic-looking sets, live actors, holograms, sound and video projection and VR to take the story to another level. The various elements are finely mixed, so you never know what is around the next corner, so your only option is to totally give yourself over and face whatever is thrown at you.

Thinking of the story and there is a particular resonance with current events. A country – in this case, the UK and its empire – smug in its own control of the things around it – suddenly finds itself attacked by a merciless invader for which it is unprepared. The government cannot control the spread and the public suffer as panic and death take over and ordinary life disintegrates. Sound familiar at all?

Highlights for me can be summed up in seven words – the beginning, the middle and the end. In more detail, I would list the following: observatory, dining room, boat, confessional, red weed, space, epilogue. I was enthralled, intrigued, terrified – not ashamed to admit I screamed like a child a couple of times – and filled with wonder. And I loved every minute. In fact, I enjoyed the experience so much, I broke the habit of a lifetime and brought some merchandise on the way out.

Summing up then. The War of The Worlds: The Immersive Experience is the best fully immersive show I’ve ever seen. Every element has been thought through and every element works wonderfully. Michael and I exited with massive grins on our faces and the knowledge that we had just lived through something amazing.

Visitors meet a colourful cast of characters as they visit the Royal Observatory, sneak into a deserted house, and escape London on a boat down the Thames, whilst trying to survive the Martian invaders.

Interactive holograms of Tom Brittney (Grantchester, Make Me Famous) and Anna-Marie Wayne (The War of the Worlds – Alive ) feature as George Herbert, The Journalist and Carrie, The Journalist’s wife, and Carrie Hope Fletcher (Heathers, Les Miserables, and The War of The Worlds – Alive!), as Beth, Parson Nathaniel’s wife, PLUS a live cast of 12 actors completing an unforgettable live experience.

The thing about Panto is not to over-think it. It’s about having fun and surrendering to the Christmas spirit. Like Christmas crackers, there is a … END_OF_DOCUMENT_TOKEN_TO_BE_REPLACED

Anyone who's worked in investment banking knows it's largely an intellectually-free zone, polluted with people who calculate each other's value … END_OF_DOCUMENT_TOKEN_TO_BE_REPLACED

By the production’s own admission, the version of events as detailed in Bonny & Read is unlikely to equate to an exactly full and fair account of … END_OF_DOCUMENT_TOKEN_TO_BE_REPLACED

This early Rattigan play has had an interesting life. Set in the Second World War and premiered while that conflict still raged, it has since found … END_OF_DOCUMENT_TOKEN_TO_BE_REPLACED