Home » Reviews » Jersey Boys at the Churchill Theatre in Bromley

It’s possible to get from London Victoria to Bromley South station in well under half an hour if you know your train timetable well enough – so it’s a little surprising that the touring production of Jersey Boys has come to the Churchill Theatre whilst a London production continues at Trafalgar Theatre (13.1 miles away, according to Google Maps). That said, there’s a reason why it’s back, both in town and (albeit briefly) in suburbia: while the phrase ‘by popular demand’ is somewhat overused these days, it’s one that applies to this slick and engaging show. 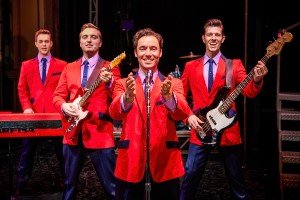 Don’t be put off by the long list of musical numbers (thirty-four in total): the show rattles through them at the right kind of pace – brisk but never feeling rushed. The fanbase of Frankie Valli and the Four Seasons will no doubt be mindful of songs from the back catalogue that didn’t make it into the stage show (the programme is kind enough to list nineteen of them). It also helps that their actual story has considerable ups, downs, twists and turns to make it riveting in any event. At one point, the question is asked of the audience what they would do if it was discovered (as it was) that a bandmate was the source of significant financial irregularities. Given that the band had sold millions and millions of records and achieved multiple number one singles, it isn’t as straightforward as saying – or singing – “Bye-bye baby, baby goodbye”.

For a show renowned for its high notes, it’s a pleasant surprise to hear the baritone tones of Lewis Griffiths in the role of Nick Massi ringing out beautifully across the auditorium. It’s the kind of touring production that attracts repeat customers: conversations between patrons before the show and at the interval invariably included remarks on when and where they had seen it previously, and it is a testament to the show’s appeal that people want to see it again, and again (and again…).

The marketing continues to place emphasis on the apparently iconic red jackets – reminders, at least for me, of Butlin’s Redcoats – though there are so many other costumes worth noting throughout the evening’s proceedings. Michael Pickering’s Frankie Valli has a confident stage presence, and the character’s initial reluctance to take centre stage even when Tommy DeVito (Dalton Wood) is spurring him on only makes him all the more endearing. Completing the ‘four seasons’ is songwriter Bob Gaudio (Blair Gibson), who, like his bandmates, was not one for mincing his words.

It is beyond the scope of this review to fact-check every narrative detail in the musical, though if there were substantial embellishments word would have spread about these by now. Either way, the storyline here never feels sugar-coated, with plenty of problems and challenges to overcome along the band’s journey. Of the supporting cast, Damien Winchester was the stand-out, brimming with energy and verve.

Occasionally, the lighting design (Howell Binkley) overdoes it – I wasn’t the only one shielding my eyes from what I can only describe as an onslaught of undipped headlights. The sound was at the right level, I thought. Some may have probably wished for it to be louder, as it is in the West End, but every lyric could be distinctly heard from where I was sitting, which wasn’t the case when I saw the show in town. With a gripping plot and some very catchy tunes, it’s a show well worth seeing. Again.

The Internationally acclaimed stage sensation, JERSEY BOYS is coming to Bromley for the very first time!

This smash hit musical has won 65 major awards and has been seen by over 27 million people worldwide.

They were just four guys from Jersey, until they sang their very first note. They had a sound nobody had ever heard… and the radio just couldn’t get enough of.  But while their harmonies were perfect on stage, off stage it was a very different story—a story that has made them an international sensation all over again. The show features all their hits including Sherry, Big Girls Don’t Cry, Oh What A Night, Walk Like A Man, Can’t Take My Eyes Off You and Working My Way Back To You.

Go behind the music and inside the story of Frankie Valli and The Four Seasons in the Olivier Award-winning, original Broadway sensation, JERSEY BOYS. From the streets of New Jersey to the Rock and Roll Hall of Fame, this is the musical that’s too good to be true.

Handel’s 1738 opera Serse (or Xerxes) is an exploration of power, love and human frailty. King Serse falls in love with the voice of his brother … END_OF_DOCUMENT_TOKEN_TO_BE_REPLACED

Lea Salonga has her fans. She also has some superfans, the ones who yell, “I love you Lea!” at almost every opportunity. If that wasn’t enough, there … END_OF_DOCUMENT_TOKEN_TO_BE_REPLACED

I have no hesitation in saying that the 1952 movie “Singin’ in the Rain” and its 1985 stage version is one of the greatest musicals of all time, … END_OF_DOCUMENT_TOKEN_TO_BE_REPLACED

There are, Maria Caruso was keen to emphasise in a post-show discussion, no wrong answers when it comes to responding to Metamorphosis or even … END_OF_DOCUMENT_TOKEN_TO_BE_REPLACED

Children of the Windrush generation, sisters Dawn and Marcia, grew up in the 1980s. In Roy Williams’ new play Dawn is shown struggling to care for … END_OF_DOCUMENT_TOKEN_TO_BE_REPLACED