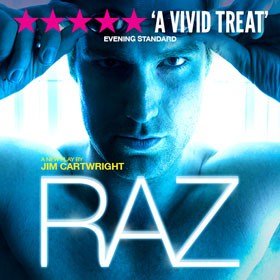 Jim Cartwright’s Raz is simplistic; the stage is empty and all the various environments and props are created by the actor who happens to be Jim’s actor son, James.

The play is set in a town in northern England and is about Shane, a 30-year-old man who works as a van haulage driver and still lives at home with his parents. It’s Friday, he’s been paid and he’s looking forward to “living it large” with a perfectly orchestrated evening of booze, drugs and girls.

We first meet Shane, dressed in his Superman boxers, enjoying a “9 minute blaster” session on a sunbed at his local salon. He then goes home where he continues to get ready whilst enjoying a pre-club drink or two “no lad goes on a night out sober!” He also receives phone calls from his mates giving him orders for “stuff” before he contacts a couple of girls in his “aviary”. He also speaks about a former girlfriend in a very dismissive, yet vulnerable, way and it becomes apparent when he encounters her in a club later that evening that she still means a lot to him.

Jim Cartwright’s rhythmic, sparky script vividly describes events as the lads travel in a cab with a know all Welsh taxi driver, before going from pub to pub to club whilst partaking in drinking, dancing, karaoke, a bit of stand up and fighting.

James Cartwright plays Shane extremely well, with a flawless delivery of lines and some excellent mimicry and mime as he brings the character to life.

Raz has transferred to London following its success at Edinburgh where it won a Fringe First. It is quite simply a fun, clever, well written and brilliantly performed piece.

Friday night, first thing, the tanning shop, a good nine-minute blaster!
Meet Shane, one of the low-paid generation that lives for the weekend while still living at home with his parents.

Come on the raz as he hits the town for all it’s worth – tanned, buffed and blowing his wage packet on a perfectly orchestrated evening of drinks, drugs, and girls: a weekend millionaire.

Tonight he’s in charge, living it large. On Monday, it’s back to the grind and he starts all over again.

How can a play be both charming and devastating? Through its tight script, abundant humour and pitch-perfect performances, 4th Country manages to … END_OF_DOCUMENT_TOKEN_TO_BE_REPLACED

Britain, so a London cab driver once told me, is obsessed with the Second World War, as though it happened just recently. Power Luncheon would seem, … END_OF_DOCUMENT_TOKEN_TO_BE_REPLACED

William J Dunleavy, author and star of this monologue play, is a writer and face to watch. He enters the room (as the staging is more geared towards … END_OF_DOCUMENT_TOKEN_TO_BE_REPLACED

Cirque du Soleil’s Luzia is a joyful whirl through a psychedelic Mexico, which reminds us why live theatre is so special. Anyone who goes to … END_OF_DOCUMENT_TOKEN_TO_BE_REPLACED