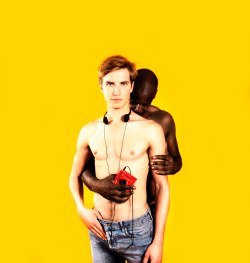 It’s always good to see a production transfer from the fringe into the West End, so I was really pleased to be invited along to review Kevin Elyot’s Coming Clean which following a successful revival at the King’s Head Theatre in July 2017, has now opened at the Trafalgar Studios.

Tony (Lee Knight) and Greg (Stanton Plummer-Cambridge) have been together for five years and seem to be happy in their relationship. Although they are a couple, they are open, which leaves Tony free to hit the discos with his best friend and total ‘scene queen’ William (Elliot Hadley) in search of a bit of ‘trade’. Tony is a frustrated writer and Greg is an author and teacher, which leaves little room for domesticity in their Kilburn flat. In an effort to restore harmony, Tony hires a cleaner, Robert (Tom Lambert) a young resting actor. Whilst young and apparently fairly naive, Robert is erudite and educated and, although Greg initially, doesn’t seem keen on him, he fits in well with the household. Possibly too well.

Coming to the play for a second time, I found myself analysing it a lot more than I had first time around. This was Elyot’s first play, first performed in 1982 and, to my mind, he hadn’t quite got the writing right at this point. The story itself is good but, there are times when the dialogue seems to go on a bit without advancing the story that much. What really saves the writing is the relationship between William and Tony. I could easily have sat for a couple of hours and just listened to their stories and banter. This was due not only to the way the two characters are written but also the interaction between the two actors playing the roles. Lee Knight as Tony and Elliot Hadley as William just work on every level. William has the potential to be an extremely irritating stereotypical bitchy queen, but Hadley keeps him on the right side of the line so, no matter how outrageous William is, you can’t help loving him. This is especially true in the scene following a very uncomfortable dinner party when William arrives having been the victim of queer bashing. My heart really went out to him at that point.

My one real issue with the writing is that, try as I might, I can’t see why Tony and Greg are together. I know opposites attract, aside from a quick fling, I really don’t understand how they have managed to have a five-year relationship. Greg is cold, unemotional and rather self-centred. He doesn’t strike me as someone that ever wanted a real relationship and, in that respect, he is definitely not a match for Tony. Plummer-Cambridge plays Greg well but I just don’t think he is that well written as a character. Finally, young Robert. Tom Lambert is making his West End debut in Coming Clean and really does well. In the first act, Lambert plays Robert as a shy, naive young man who seems to blush every time someone speaks to him. However, by Act II, there is another side to him revealed and there is a moment in Lambert’s last scene where Robert has a little smile on his lips that led to a complete re-evaluation of the character.

Director Adam Spreadbury-Maher applies a deft touch to the production, particularly with the scene changes which are subtle and keep the pace moving along nicely. Amanda Mascarenhas’ living room set is very appropriate for the setting and as the space is fairly small, it really feels as if the audience are right in the story with the characters.

All told, Coming Clean is a fascinating play in its own right. Whilst it is, obviously, a gay play, if the characters of Tony and Robert were female, then it would be equally effective as a ‘straight’ play. The story is about relationships and trust, two fundamental parts of human lives. This production brings the story to life well with a talented cast making all four interconnected characters both believable and very human and is a welcome addition to the current crop of plays in the West End.

“We haven’t been faithful to each other since we met… why have you suddenly decided you’re not in the mood for sharing?”
The producers behind the Olivier nominated La Boheme transfer Kevin Elyot’s revolutionary drama following a critically acclaimed run at the King’s Head Theatre.

Tony and Greg seem to have love all figured out. They’re in a committed relationship but with room for a little more on the side whenever it takes their fancy. The only rule? Never sleep with the same man twice.

When drop-dead gorgeous Robert walks into their lives, the fragile foundations of their sexual contract are thrown into jeopardy.

Booking Period: 9 January – 2 February 2019
Running Time: 1 hour 55 minutes including an interval – Latecomers will not be admitted.

It is 2002 – another Royal Jubilee year, and HRH (Mary Roscoe) is due to open a new Science wing in a 'sink' comprehensive where Dr Derek Jones … END_OF_DOCUMENT_TOKEN_TO_BE_REPLACED

Dr Anna LaRosa (Dr Stefania Licari) has a lot to say. Just as well, as she’s the only one on stage in this medical comedy, which largely draws its … END_OF_DOCUMENT_TOKEN_TO_BE_REPLACED

Nikhil Parmar’s one-man show, originally written as a TV pilot, manages to touch on a wide range of themes from Islamophobia to modern fatherhood with … END_OF_DOCUMENT_TOKEN_TO_BE_REPLACED

Handel’s 1738 opera Serse (or Xerxes) is an exploration of power, love and human frailty. King Serse falls in love with the voice of his brother … END_OF_DOCUMENT_TOKEN_TO_BE_REPLACED

Lea Salonga has her fans. She also has some superfans, the ones who yell, “I love you Lea!” at almost every opportunity. If that wasn’t enough, there … END_OF_DOCUMENT_TOKEN_TO_BE_REPLACED