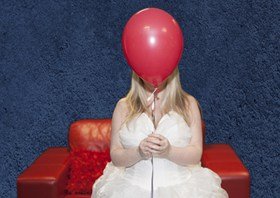 We first meet Jess as she tries to rid herself of her flabby tummy by working out to an exercise DVD – reading to us her recently uploaded profile to “Plenty of Fish”.

She then, on a “Nesco” colleague’s recommendation, she heads out on her first, disastrous attempt at speed dating. Heartache then follows when she’s stood up by the man, she’s starting to believe is the one, “Dave Jones”, with whom she has been texting/messaging for several weeks. Jess then describes her “toilet roll dolly/ meringue style” designer bridesmaid dress for her best friend’s wedding and, for her; the only bright spots of the day will be her sitting next to her friend’s future brother-in- law, James, and her attempt to catch the bridal bouquet. A fun scene later in the play describes her date with James, “who is nowhere near as much fun sober as he is when he’s drunk” (the gift bag of a “James kit” which was given to us as we left was a lovely touch and helped ensure we all left the theatre with smiles on our faces). Jess also decides that the time is right for her to become a mum but following a difficult evening babysitting decides it might not be right for her just yet!

Sophie Osborne’s script is well-written, observant and sparky; her delivery is flawless. Great use is made of the main props, which are a sofa and a mobile phone. Sophie also engages well with the audience including Jess’s embarrassing evening with a man she meets on her friend’s hen night and her asking someone (me, this evening!) to hold her friend’s baby. Whilst there are quick costume changes the wardrobe is typical of a single lady in search of a man, ie high, sparkly heels, short skirts and plunging tops although this is culled during Jess’s attempt to better herself by leaving the shop floor for a more professional working environment.

Benjamin Lee does a superb job of playing snippets of some great 1980s songs all of which complement the dialogue perfectly. John Garfield-Robert’s direction is well-paced.

The ending, which takes place at Jess’s 31st birthday party, is touching and thought-provoking.

One woman comedy ‘Kissing Frogs’ is back on tour by popular demand!
Meet Jessica Ramsbottom – or Jess to her friends. She’s just turned 30, has no children, stuck in a dead-end job and is STILL single. In the whirlwind world of speed dating, online dating and one night stands, does her perfect man really exist? Will Jess find the man of her dreams, or will she be the only one of her friends destined for the shelf?