A tired old man sits at a desk listening to tape recordings of himself from decades earlier. At times he basks in the warmth of memories from his youth; at others, he can’t bear the pain, the regret, and he switches the machine off. He means to make a new recording, but he can’t ever seem to get to the end of it, for the pull of the old tapes is too great. He is bound to them and the younger version of himself he hears, with all his hopes and fiery passions. 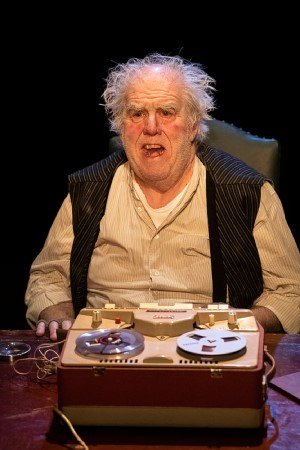 John Chapman is the man, Krapp, in Samuel Beckett’s Krapp’s Last Tape. He wears tattered clothes and his hair is unkempt as he wanders about the stage, worn down by all the time that has passed. And old age has not brought with it certainty or contentment. Far from it. Chapman plays Krapp as confused, with sudden, instinctive jerks of the body and distant frowns that perfectly convey the dilemma of memory, namely that reminiscing can seem to make us both happy and sad at the same time…

This is a very Beckettian sort of tension. Similarly, in a number of his plays Beckett juxtaposes tears and laughter, and implies that comedy and tragedy are bound together, two sides of the same coin. (This is almost certainly how he saw the world, with all its competing wonders and horrors.) In Krapp’s Last Tape Chapman embodies this to great effect, as his sorrowful air is offset by moments of slapstick; he gobbles down a banana, trips up like Oliver Hardy, and you can’t help but laugh out loud in spite of the bleakness of it all.

For it is certainly bleak. The sparse set – a desk, a chair, a pile of shoeboxes filled with the tapes – is a constant reminder of Krapp’s loneliness. (In the recordings he hears his younger self describing his mother and his lovers, but the old Krapp is very much on his own.) A single lamp hangs over him, and though he is ‘burning to be gone’, still it shines somewhat brightly, and Krapp lives on in spite of his misery. If you have seen Waiting for Godot or Endgame then you will recognise this unwitting stoicism that drives so many of Beckett’s characters onwards.

So Krapp is all alone, with just his own ghost for company. Chapman plays the younger version too of course, and manages a fine, spring-in-his-step, whole-life-ahead-of-him tone. It’s as if they are and always were two completely different people! And in a way, isn’t there something in this? In what way can a seventy-year-old say they are truly the same person as their forty-year-old self? Or their twenty-year-old self? And isn’t it only really memory that binds all the different little versions of ourselves together into the story we call life?

Those were the types of questions that drove Beckett on and they’re there at the heart of Krapp’s Last Tape. It’s philosophy as much as it is drama, but still, it’s deeply moving. On the way out I heard a man who’d clearly seen the play many times before saying rather sadly, ‘It gets harder to watch the older you get’. He meant it as praise. It might haunt you, but if it does it won’t be in a cheap, spooky way; instead, you might well find yourself quietly considering your own life, your own memories and your former selves long after the light goes out.

In Beckett’s critically acclaimed play, an aging man, who lives a lonely and shabby existence in a darkened room, listens to a taped recording of himself as a young man.

In his 69th year, Krapp takes out a bottle of wine, a banana and his tape recorder, and he listens as his own voice from the past recounts the glories and hopes of himself at 39. Beckett imaginatively understands the implications of tape-recording at a time when that technology for private individuals was in its infancy. A story about family and boundless friendship, stretching through territory, language and species.

A rapid switch of Alex Roberts’ baseball cap from back to front, together with an appropriate change of pitch and accent, are all that is required for … END_OF_DOCUMENT_TOKEN_TO_BE_REPLACED

It’s a sad tale, as the audience is duly informed at the start of the show, but before it reaches the point of melancholy and woe, there are a lot of … END_OF_DOCUMENT_TOKEN_TO_BE_REPLACED

There is nothing in Lucy Porter’s show, or so Porter herself asserts, for the younger generation: it is all about her mid-life crisis and what she did … END_OF_DOCUMENT_TOKEN_TO_BE_REPLACED