Now in its 15th year, La Clique have firmly established their place on the world burlesque circuit and this year’s London cast bring their infamous saucy circus to the Underbelly Festival in Cavendish Square, Central London, where the crowds are more than ready for some physical thrills and a fun night out. 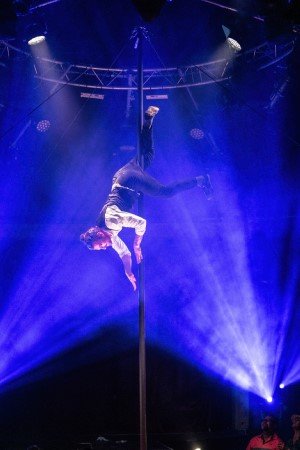 La Clique doesn’t disappoint, setting the tone for the night very clearly with a bold and beautiful entrance from Burlesque superstar Jolie Papillon, who unashamedly flaunts her peacock feathers and reminds us this is going to be an evening of classy, excellently executed entertainment.

And so we begin, with this year’s London cast of some of the most talented circus, burlesque and cabaret entertainers in the world. There are spectacular aerial acrobatics, from Katherine Arnold, and a breathtaking pole routine from Mikael Bres who has the audience gasping as one and simultaneously spellbound. Lj Marles charms and defies gravity and the two more humourous acts, J’aiMime and Sam Goodburn hold the audience perfectly, I won’t do spoilers on the acts, but Goodburn subverts the idea of Burlesque brilliantly and J’aiMime is seduced by alcohol and an empty suit exquisitely (we’ve all been there!). Ashley Stroud gifts us with songs in between acts and her jazz rendition of Drunk in Love is gorgeous.

As the evening progresses the theatrics, acrobatics and jaw-dropping physicality of the performers continues to escalate leading to some extraordinary moments of athleticism (Katharine Arnold’s Creep routine is stunning), some riveting visual absurdity from JaiMime and one of the sexiest bath scenes and audience might ever encounter from Jolie Papillion, and one of the most exhilarating acts I’ve ever witnessed from The Skating Willers – and includes some funny and terrifying audience participation.

I’ve seen La Clique shows most years for more than a decade now, and always love them, and though I did miss some of the more quirky acts from previous years, this is still top-class entertainment from world-class talent at the top of their game.

The original, trailblazing, genre-defining cabaret show returns to London this Spring, hot off the heels of sensational seasons in Singapore and Leicester Square at Christmas.

Born at the Edinburgh Festival in 2004 and subsequently travelling the world to international acclaim, La Clique is widely regarded as THE original Spiegeltent cabaret show that created a genre of its own with its award winning and superlative family of circus, cabaret and music performers and its unique and irreverent atmosphere.

Step inside Underbelly’s majestic Spiegeltent just off Oxford Circus for a uniquely La Clique night of the finest, funniest, phenomenal and awe-inspiring cabaret.

Titus Andronicus is not usually a comedy, it is usually a bloody, villainous and vengeful tale, but tonight it is a comedy and a rather amusing one at … END_OF_DOCUMENT_TOKEN_TO_BE_REPLACED

This show is not without clichés - there are three of note in this production. Firstly, the French horn of the show’s title is personified, speaking … END_OF_DOCUMENT_TOKEN_TO_BE_REPLACED

There’s very little in the way of set in this show: aside from chairs, a few crash barriers and at one point, a red carpet, the actors’ movements … END_OF_DOCUMENT_TOKEN_TO_BE_REPLACED

South African born, but raised on the Isle of Man, Pierre Novellie is a true raconteur rather than just another 'stand-up' comedian. He says about his … END_OF_DOCUMENT_TOKEN_TO_BE_REPLACED

This show, Willy Hudson began by saying, is about himself. It is written by himself, is directed by himself and executive produced by himself. Almost … END_OF_DOCUMENT_TOKEN_TO_BE_REPLACED