The Hen and Chicken’s Theatre is currently hosting the latest play from actor and playwright Alice Henley, entitled Lal – the story of the East End girls who kept Britain going while the boys were away fighting World War II. The play follows the character of Lal Cotton, struggling with domestic abuse and fighting to hold her world together while the country is facing its greatest ever threat. Themes of the play include war, love, loss and community as this company band together as they struggle to come to terms with the realities of war. 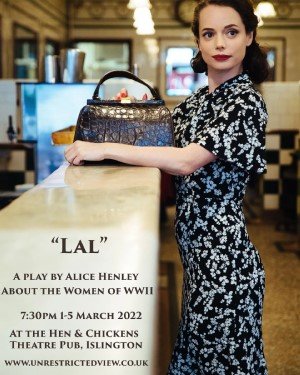 The audience are welcomed to the stalls with soft sounds of the ‘40s playing, and to stages left and right are posters and postcards from the era cementing us in wartime England. We meet Lal Cotton (Alice Henley) and her colleagues as Mr Gerald Rubenson (James Messer) announces the changes that will occur within their company (Marks and Spencers, Walthamstow) as a result of men being called to fight. As the story unfolds, we see Lal and Gerald missing out on their chance of a relationship as he is summoned to the front, resulting in Lal meeting her husband Mick (Charlie Ellerton) through her friend Patsy (Lucy Scammell) at her new job. In parallel to this, we see Lal’s sister Doris (Alanya Hotchkiss) sent away from the city to escape the Blitz, Vi (Becky John) tragically lose her fiancée Robert (Tom Sansone) and Lal’s father Albert (Richard Glover) lose his wife Alice (Ciara Pouncett) in a bombing as he serves in the home guard.

The story is engaging and flows well throughout. A particularly poignant scene is when Gerald writes to Lal sending news of Vi’s fiancée Robert’s death from their station in Egypt. Becky John (Vi) really came into her own here; her timing is perfect as she reads the letter, pauses and gasps, collapsing in disbelief as Lal (Henley) holds her with unrelenting support. John (Vi) acted the heck out of the scene, I could have watched her for hours. Her portrayal throughout the entirety of the play is heartfelt, funny, and touching. A 5-star performance. Henley’s writing here is outstanding and with superb direction from Stuart Black that communicates the raw heartache and loss that was suffered by so many.

The use of silence is most effective also, in particular the confrontation letter scene in Act 2 between Mick (Ellerton) and Lal (Henley). The audience didn’t dare breathe as Ellerton darted suddenly between deathly whispers and earth-shattering bellows, the silence is deafening and terrifying. The Hen and Chicken’s Theatre worked especially well for this scene with the audience so close to the action, like we were in the room with them. We could have been next on Mick’s hit list. An astonishing performance from Ellerton as brooding and boisterous Mick, and exemplary direction from Stuart Black, bravo.

Another top performance is James Messer’s portrayal of Gerald Rubenson. The monologues in Act 2 are delivered superbly, with good use of diction, projection and inflections in pitch. The speeches are sensitive and rousing, exemplified in the lines “We must be united” and “This is our war”. He successfully conveys the inner emotions of a man working hard to shield his feelings in a stiff-upper-lip manner. An outstanding performance.

The leads have a great team of supporting actors, particularly Richard Glover (Albert), Ciara Pouncett (Alice / Olive) and Lucy Scammell (Patsy / Gene). Glover’s subtle delivery of humorous lines is effective and thoroughly enjoyable, shaking his head while brandishing the newspaper (the headline “PUTIN: WAR IN EUROPE” didn’t go unnoticed, the director Stuart Black drawing an unsettlingly moving parallel here) and the audience come away really admiring his character as an adoring father. Pouncett is impressive as the matriarchal mother with a touching, sentimental performance, and Scammell is an ideal Patsy, clearly expressing her caring and strong-willed nature. Bravo to all.

A mention must go to the technical aspects of the production. The sound design, in particular, is used well to strongly communicate the location of the scene, for example the crickets in Egypt in Act 1, typewriter and telephone sound effects in the office scenes and the whistle from the train in the station scene in Act 1. It really transports the audience and adds to the emotion of the scenes.

Overall, this is a wonderful production with a touching story and some must-see 5-star performances. Lal is not to be missed; you’ll laugh, you’ll cry, and I’m sincerely hoping Lal and I will “[We’ll] Meet Again”.

“Lal” is about the women of World War II who had to step up and take care of Britain while the men were away at the Front. It tells the story of Lal, a shoe clerk in Walthamstow, who has to survive both the falling bombs of the Blitz and a toxic, alcohol-ravaged marriage.

I have seen some outstanding acting recently at the intimate Finborough Theatre, and this new play is no exception. The highly talented cast quickly … END_OF_DOCUMENT_TOKEN_TO_BE_REPLACED

In the pandemic (remember that?) I worked in adult social care. My role was to help older people in their own homes with daily tasks - I’d cook meals, … END_OF_DOCUMENT_TOKEN_TO_BE_REPLACED

The world-famous Wilton’s Music Hall and the children’s classic The Wind in the Willows make perfect bedfellows. Piers Torday has written a version … END_OF_DOCUMENT_TOKEN_TO_BE_REPLACED

Some journalists get, as it were, a bad press, though some of them don’t help themselves with some of the things they write and do. This play doesn’t, … END_OF_DOCUMENT_TOKEN_TO_BE_REPLACED

Paul (Lewis Bruniges) and Freddie Metz (Oliver Yellop), who identify as cousins, are so desperate to get out of the German Democratic Republic, … END_OF_DOCUMENT_TOKEN_TO_BE_REPLACED