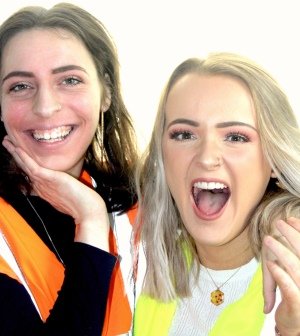 There’s a level of naivety, gradually replaced by self-discovery, in this intriguing story about Leah (Francesca Bloor) and Eve (Valerie Smith), who go off to Calais in 2016 as part of their post-graduation gap year (that’s a thing, apparently – having another gap year after getting letters after your name). Their purpose was to assist with the operations of the Camp de la Lande, as the French authorities called it, or the Jungle de Calais. As it is essentially their story – with embellishments, with to the production’s credit, are acknowledged in the show’s prologue – it is from their perspective, and so they find the accommodation to be quite adequate.

Well, theirs probably was. But the focus, which comes across as rather vacuous in hindsight, is on things like Leah’s hands not looking their best after a shift mostly spent doing dishes for such a camp with thousands of people in it, rather than inadequate access to drinking water, toilets and showers for the inhabitants as reported elsewhere. When they returned to Calais in 2019, they expressed surprise at how much things had changed. It is surprising (at least to me) that they hadn’t maintained an interest in continuing developments in the region, given their extended stints in the Calais Jungle, but as they later acknowledge, the mainstream media stopped covering it after a while.

There are pockets of humour: Leah’s mother (also Smith) is often screaming like a banshee down the phone at her daughter, ordering her to come home and generally taking a highly negative view of her ‘bohemian’ decision to work for free in the Calais Jungle when she could jolly well get a job in Blighty and earn a living. I found it interesting that Leah and Eve were portrayed as still pining for relatively frivolous things at home having seen first-hand people who have nothing depending on (as Blanche DeBois would put it) the kindness of strangers.

Were they really changed as a result of their experiences? What was their underlying motive – to satisfy themselves that they had done good? In a later scene, Eve seems to criticise everyone who didn’t do what they did, and this air of superiority, although quite revealing and demonstrative of character development, makes the volunteer appear smug and arrogant. Such is the play’s intention, as it happens – at the start the audience is informed that neither of the central characters could reasonably be deemed “nice people”.

Some swift costume changes and uses of different accents for various supporting roles made the show easy to follow. Smith’s Jamil, a highly enthusiastic teenager who is keen to get to Birmingham to join other members of his family already settled there, is an example of the decent taste in which the rather sensitive topic of the migrant crisis is handled. Different narrative techniques are in evidence (there’s even a dance break), though the production could ditch the microphones without consequence. A well-constructed coming of age story.

Two girls go on a journey. They want to annoy their Tory parents. They want to make a difference.
But as they find themselves in the middle of an international refugee crisis, they realise they are going to need to do more than just a fun run to help. Hilarious, heart-felt and haunting, White Girls explores voluntourism within the Calais Jungle from 2016 to the present day and questions the notion of white charity.