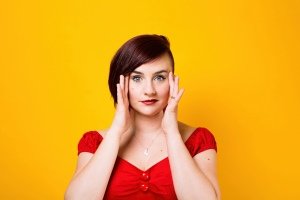 I’m glad I’m not the only one who doesn’t like calling That Referendum by that word beginning with ‘B’. At the Edinburgh Fringe, however, there’s a need to clarify even what ‘That Referendum’ means, as an ongoing debate about Scottish independence continues to periodically make appearances in the Scottish press. Laura Lexx talks Brexit by asking someone to name the football team that they support, and then stealthily substitutes the B-word for, say, Rangers. Thus, Rangers has divided the nation, Rangers could have a chilling effect on job creation in Britain, and had it not been for Rangers the Government would have more time to deal with other matters affecting people’s lives in Britain today.

Brighton-based Lexx is a supporter of the Green Party, and has some interesting ideas on how to increase the country’s commitment to tackling climate change (or climate breakdown, as it is now apparently known) – for instance, the idea that temperatures will gradually rise in this country is actually quite an appealing one in some ways, so that needs a rethink. She’s so warm and welcoming that it is difficult not to be taken in by her charming nature.

This is something that a number of comedy acts have picked up on at this year’s Fringe – the process of leaving the European Union has led to opposing views becoming very entrenched and rather irrational. Lexx puts both sides of the story across brilliantly, from those who think the Union is, in a word, evil to those who would allegedly put campaigning for the Union before family. (I know of at least one person who has done the latter, and he very much regrets it now.)

Lexx saves the best until last, in a section comparing and contrasting football with netball. While women’s football has taken hold in recent years, this wasn’t the case in Lexx’s school days, and the systematic takedown of netball’s rules is an utter masterclass in comedy. Yes, it’s rather contrived, but it’s also highly amusing. And there was perhaps the most concise and accessible explanation of football’s offside rule that I have ever come across, without the need for diagrams or projections.

Tackling subjects that people would be forgiven for wanting to avoid over the dinner table, Lexx is utterly brilliant at spinning hilarious narratives out of such topics.

It’s remarkable quite how much ground Lexx covers – there’s a bit about artificial intelligence, and another about transphobia. The venue was uncomfortably warm (Lexx was almost incredulous that someone had their scarf on) but the show is red-hot on contemporary issues and observational comedy.

The world seems furious at the moment, whether that is over Brexit, carbon emissions, gender, plastics in the sea, nationality or whether or not we should be aiming for the future or the past. Maybe Laura is projecting, but, is all this arguing and fighting down to the fact we’re absolutely terrified? In Knee Jerk, Laura uses the tricks she learned to cope with her eco-anxiety to try and soothe the world’s temper and calm down our various phobias.

Laura takes on many of society’s big issues – including feminism, technology and the environment – asking questions such as, can you change the world without offending anyone? Can we stop being terrified and start being nicer to each other? Can you use netball to solve the gender pay gap? Spoiler alert: come for jokes, not for answers!

The thing about Panto is not to over-think it. It’s about having fun and surrendering to the Christmas spirit. Like Christmas crackers, there is a … END_OF_DOCUMENT_TOKEN_TO_BE_REPLACED

Anyone who's worked in investment banking knows it's largely an intellectually-free zone, polluted with people who calculate each other's value … END_OF_DOCUMENT_TOKEN_TO_BE_REPLACED

By the production’s own admission, the version of events as detailed in Bonny & Read is unlikely to equate to an exactly full and fair account of … END_OF_DOCUMENT_TOKEN_TO_BE_REPLACED

This early Rattigan play has had an interesting life. Set in the Second World War and premiered while that conflict still raged, it has since found … END_OF_DOCUMENT_TOKEN_TO_BE_REPLACED