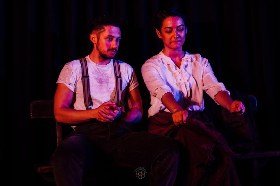 I have rarely, if ever, had such an immersive experience at the theatre before the show had even started, even if all I did was attempt (and fail) at throwing a ball into a cup, one of several fairground attractions on show as the audience filed in to take their seats. Elsewhere, an old-style photo booth was in full swing. We really had entered into a funfair, and in that frame of mind continued to forget we were even in a theatre, right up to curtain call.

Liliom’s scene changes are slightly unwieldy, mostly because of the configuration of the Bread & Roses Theatre; I think this production executes the scene changes as swiftly and smoothly as is feasible, even if they take a little time. The Rodgers and Hammerstein musical Carousel borrowed heavily from Ferenc Molnar’s 1909 play. In 2015, it’s this adaptation of the Hungarian original that comes out on top. It’s pacier. Where the musical chooses to warble Julie’s hypothetical thoughts about what she would say if she loved the carousel operator chatting her up, here, “If you loved me… but you don’t,” muses Liliom (Blain Neale) to Julie (Daniela Ologeanu), and, as far as that scene is concerned at least, that’s that.

The play as a whole progresses at a steady speed, leaving its musical (re)incarnation comparatively pedestrian. For me, Liliom also makes more sense in its narrative, even in its final scene, in the afterlife. The ending is subtle, and debatably ambiguous – though it seemed clear to me what would happen to Liliom after his time in purgatory, it is not actually acted out or even described: technically, we can’t be sure. Liliom’s cross-examination in a purgatory court will seem ridiculous to some, but I suspect this will have more to do with a personal disbelief in the concept of purgatory in the first place, rather than a criticism of the scene itself. The Magistrate (Alariza Nevarez) is confident and self-assured, a figure of authority to be respected, even if only in fear.

The merry month of June doesn’t bust out all over; indeed in one outdoor scene, umbrellas are used. There’s also much to be considered in this play, not least with regards to domestic violence. Having been sacked from his employment at the fairground, and unable to secure another Position elsewhere, Liliom gets so frustrated over time that one day he hits his beloved Julie. The implications of this are explored sensitively, and take into account the complications arising from continued feelings of mutual love the young couple have for one another.

There’s some extraordinary puppetry (yes, puppetry!) from Samantha Kamras as Marie, who doubles up through the said puppet as her husband, Wolf Beifeld. Wolf’s part is minor that paying another actor to play it is an expense that a theatre company on a finite budget (that would be all of them!) needs to carefully consider. It may initially come across as something out of Avenue Q, but once the initial titters from the audience die down, Kamras’ delivery of both husband and wife’s lines are a pleasure to hear and see.

As for Blain Neale, his Liliom is sometimes subtle, sometimes arrogant, sometimes frantic, but always engaging. There isn’t a weak link in this company. Although not always perfectly polished (the odd line or two here and there went slightly awry), this is an incredibly moving piece of theatre. It more than passed the crudest of my personal yardsticks: I was never in danger of nodding off as it held my attention throughout. An astonishing debut from Torchlight Collective, who have arrived on the London stage in style.

Liliom a legend in seven scenes
Liliom follows Eastern European folktale structure with a beautiful blend of realism and fantasy.  Molnár’s mastery of dramatic technique, light comedy, and willingness to address difficult moral and ethical issues without settling for an easy answer is what made him the most accomplished Hungarian writer of the early twentieth century.

The descriptions of what happens in this show are so vivid that paradoxically they leave nothing to the imagination – and, at least at the performance … END_OF_DOCUMENT_TOKEN_TO_BE_REPLACED

As theatre productions go this is a memorable, magical experience filled with heart and love and so many tiny thoughtful details, that I’m not sure a … END_OF_DOCUMENT_TOKEN_TO_BE_REPLACED

There are no props at all in Dog, and yet despite a dog, Roy, being very much a key character, the staging and dialogue are more effective than they … END_OF_DOCUMENT_TOKEN_TO_BE_REPLACED

Be astonishing. That’s Derek Jarman’s exhortation to the world at large and - at the end of the show - to this particular audience. And in this … END_OF_DOCUMENT_TOKEN_TO_BE_REPLACED