To be fair, Linda Lavin called her concert Love Notes, there’s an album of the same name, and that’s more or less what it was about – variations on the overarching theme of love. The songs alone form a narrative of sorts: assuming the running order was precisely as it was meant to be (there was no reason to suspect things were amiss), she had her eye on someone, to the point where she admitted spying on them, then, when that episode of young love came to an end, she wished she were in love again. Then she was in love again, but this time a little older and wiser. And so the songs continued. 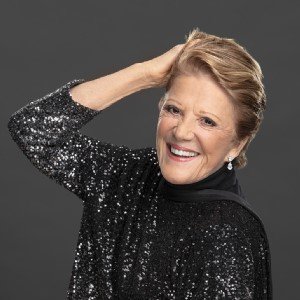 Lavin, now eighty-four years young, claimed she was too old to understand how streaming services work, before telling the audience she has had over a million streams on Spotify, so she must be doing something right. Much credit went to her musical director, Billy Stritch – their fans, apparently, call the duo ‘Lavitch’ (I say ‘apparently’ as neither used the term themselves) as a result of a series of thirteen socially distanced concerts without a live audience during the pandemic, broadcast on Facebook Live.

One might need to be of a certain age to recall the tunes in this concert, but the songs can be enjoyed regardless of stage of life. I wasn’t around, for instance, when Harold Prince directed a production of It’s a Bird… It’s a Plane… It’s Superman on Broadway in 1966. If you haven’t heard of it either, it closed after less than four months. But ‘You’ve Got Possibilities’ is probably the one memorable tune that’s lasted through the years, and its positive message still has much appeal.

Tom Hubbard on double bass, Daniel Glass on the drum kit and Aaron Weinstein on violin also flew over from the States, and were given chances to shine in this varied concert that even had Lavin take to the piano herself. Hers isn’t a powerhouse vocal, but then again, these aren’t powerhouse songs that call for the hairdryer treatment – these are pleasant and intricate melodies. She knows what she’s good at, and there’s a warm and inviting atmosphere created by a gentle and playful on stage personality.

Okay, so it was about love, but it wasn’t heavy on heartbreak or love’s destructive power. A song called ‘The Boy From…’ from The Mad Show, a 1966 Off-Broadway revue with lyrics by Stephen Sondheim (who wrote the song under the pseudonym Esteban Rio Nido) and music by Mary Rodgers, is hilarious, partly because Lavin’s character hasn’t worked out her love interest is homosexual: “Why do his friends call him Lilian? / And I hear at the end of the week, he’s leaving to start a boutique”. Every verse ends with the name of the love interest’s (fictional) village, Tacarembo la Tumba del Fuego Santa Malipas Zacatecas la Junta del Sol y Cruz, except at the end of the song, the man is “moving to Wales”, and specifically (and somewhat unsurprisingly) to Llanfairpwllgwyngyllgogerychwyrndrobwllllantysiliogogogoch.

The Great American Songbook wasn’t the only kind of music on offer, with a few more contemporary songs sprinkled in. Linda Lavin isn’t one for long stories (except through song, of course), keeping her anecdotes breezy and brief. A relaxed and refreshing experience.

Known to millions for playing the title character in the groundbreaking American television series, Alice, Ms. Lavin is thrilled to be making her London concert debut at Crazy Coqs with her show: LOVE NOTES.

Lavin will sing and swing her one-of-a-kind renditions of songs by composers including Gershwin, Porter and Jobim, as well as share tales from her legendary career as a star of Broadway, television and film.

I have seen some outstanding acting recently at the intimate Finborough Theatre, and this new play is no exception. The highly talented cast quickly … END_OF_DOCUMENT_TOKEN_TO_BE_REPLACED

In the pandemic (remember that?) I worked in adult social care. My role was to help older people in their own homes with daily tasks - I’d cook meals, … END_OF_DOCUMENT_TOKEN_TO_BE_REPLACED

The world-famous Wilton’s Music Hall and the children’s classic The Wind in the Willows make perfect bedfellows. Piers Torday has written a version … END_OF_DOCUMENT_TOKEN_TO_BE_REPLACED

Some journalists get, as it were, a bad press, though some of them don’t help themselves with some of the things they write and do. This play doesn’t, … END_OF_DOCUMENT_TOKEN_TO_BE_REPLACED

Paul (Lewis Bruniges) and Freddie Metz (Oliver Yellop), who identify as cousins, are so desperate to get out of the German Democratic Republic, … END_OF_DOCUMENT_TOKEN_TO_BE_REPLACED