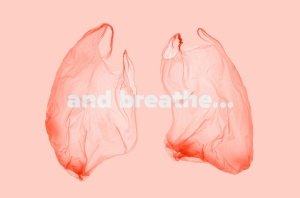 Nobody – well, very few people – like a smug person, so part of me asks for your forgiveness in telling you that some of the plastic bags in my possession are considerably older than the average lifespan of twelve minutes that And Breathe… tells its audience a plastic bag is used for. One time, a checkout assistant at a branch of Tesco Express insisted on replacing the bag I brought with me free of charge because it was so worn out. As everyone who uses a supermarket knows, each new plastic bag must now be paid for, which some people simply incorporate into their spending.

This show’s narrator goes through various experiences and attempts to persuade others to be more environmentally conscious, usually without much success. A work colleague is asked about the collective amount of cling film they wrap their packed lunches in over the years, and whether the money could have been better put towards, say, Tupperware. In another scenario, an instruction (for that is what it is) to use a bin rather than leave rubbish lying around in a public place is not well received, to say the least.

An atmospheric soundscape does not, mercifully, distract or detract from the narrative, itself a reasonably fast-paced set of conversations, each more aggressive and confrontational than the previous one. The tact and diplomacy of the opening scene is eventually discarded completely in favour of statements like, “You have ruined my meal with your ignorance and obnoxiousness!” And it is refreshing that a new production does not reference the pandemic, it may have been useful to explore its effects on the use of plastic, in an era where, for example, disposable plastic gloves and aprons are used more than ever on the healthcare frontlines.

Then again, the emphasis is on the unnecessary use of plastics. I found the Tupperware reference to be important as it demonstrates the show isn’t engaging in an all-out war on plastics, but rather asking (without being too preachy) people if they could commit, within reason, to be mindful of how much plastic material is being used and thrown out. At just over twelve minutes long, there isn’t much time to explore in depth any of the issues raised, though as ever it is better to leave the audience wanting more than to outstay one’s welcome.

And Breathe…
by Mark Conway & Alex Packer, part of The Living Record Festival

He’s drowning under the weight of all this.
But who will sink first? Him or the rest of us.
Using text, movement & surround sound, this short film brings the impact of plastic on the human mind & body into focus.

This film has been made especially for The Living Record Festival 2021, and lasts the same length of time as the average life-span of a plastic bag.

The film contains some strong language and flashing images.
And is best experienced through headphones.