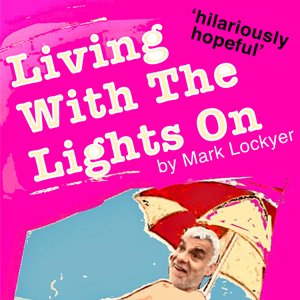 If you’re not familiar with the Golden Goose Theatre in Camberwell, you’re not alone – it’s a new theatre about a ten-minute walk from Oval Tube station. Without social distancing, the auditorium seats 80 – with the arrangements in place at the time of writing, it is significantly less. Given how many spaces are still closed as of now, you’d be forgiven for thinking that it seems to be easier to open a new theatre in a global pandemic than to reopen an existing one. Either way, this new venture has opened with something highly appropriate for our times.

Living With The Lights On takes an autobiographical look at mental health, a topic that was gaining ground even before the pandemic hit, but with so many people negatively affected by recent changes to personal circumstances, there’s perhaps a greater level of empathy with people who struggle to cope with the pressures of daily living. The regular direct interaction Mark Lockyer has with the audience keeps people engaged, and although the show has been doing the rounds since 2016 when it ran at the Young Vic, Lockyer’s delivery remains fresh and invigorating, as though he were telling his story for the very first time.

Your reviewer has seen actors ‘dry up’ in various ways before, but nothing was quite on the scale that Lockyer achieved at the Royal Shakespeare Company in 1995, not only skipping entire lines in a speech (instantly noticeable to the Shakespeare aficionados in the audience, which, the RSC being what it is, would have been practically everyone except those dragged along to the show) but depriving the saxophonist of their instrument before heading downstage and doing an impression of the musician Courtney Pine.

And it is details of that nature that really make the narrative come alive, recalled in exquisite detail – not just the good times but the bad and the ugly ones, ranging from a holiday in Skiathos, an island in Greece probably most famous in recent times for being one of the filming locations for the 2008 motion picture Mamma Mia!, to a messy breakup with a girlfriend of seven years. There may well be an element of the ‘unreliable narrator’ but to me, it all seemed credible, however weird and wacky some of the events recalled were. It’s not much of a spoiler, I don’t think, to let you know that the RSC was not impressed with contemporary jazz music suddenly materialising in Act I Scene V of Romeo and Juliet.

Amongst all the laughter is some poignancy, though this isn’t a triumph over adversity story, if only because the ‘adversity’ of mental ill-health isn’t over until it’s over, so to speak, which perhaps explains why Lockyer is far from alone in being someone with a mental ill-health diagnosis who has attempted to be taken by their own hand. Shows like this are helping to reduce further some of the stigma that still exists around mental health. It doesn’t claim to speak for ‘everybody’ – this is Lockyer telling Lockyer’s story, with an informal living room ambience that puts a smile on people’s faces whilst also highlighting shortcomings in the psychiatric care system.

Meet Mark.
The thing is I’ve got myself into a bit of a mess…
Mark’s an actor.
I keep forgetting my lines. I’ve left my girlfriend and I’m beginning to stink.
Mark was an actor.
And to make matters worse I’ve met the Devil.
Hilarious, touching and utterly bonkers, Living with the Lights On is a gripping story of a life lived at the edge.
Living with the Lights On is a critically acclaimed play written and performed by Mark Lockyer. 30 years ago, Mark was a promising young actor getting juicy roles at the National and the RSC. Then, one summer in Stratford, his world fell apart.
During a performance of Romeo and Juliet, Mark – playing the mercurial Mercutio – had a breakdown.
This is a play about surviving and living with bipolar disorder. We go on a moving – and often absurdly hilarious – journey with Mark through a relationship breakdown, encounters with the justice system and the mental health system.
It’s a story filled with humour, tragedy – and a happy ending.