Home » Reviews » Looking For Me Friend: The Music of Victoria Wood

When I think of Victoria Wood, I smile, I have a very clear memory of her sitting at a piano, wearing a blazer with sleeves rolled up, smiling at the camera, singing, and making me laugh. The song I always remember is the Ballad of Barry and Freda and that iconic line “Beat me on the bottom with the Woman’s Weekly let’s do it, let’s do it tonight!” I’d imagine many Brits have a similar memory due to her prolific TV appearances starting in the late 70s until her death in 2016 – Victoria Wood, As Seen on TV, Acorn Antiques and Dinner Ladies. 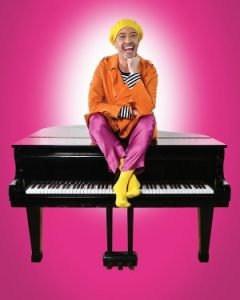 In preparation for a residency at The Assembly Rooms at the Edinburgh Festival, Paul L Martin Also known as Paulus (some of you may recognise him as a judge on the BBC TV Singing show All Together Now) has put together a 90-minute cabaret production in honour of all things Victoria Wood, and firmly sets his place as an aficionado on the life works of the late, grate talented Victoria Wood CBE. I went along to this musical spectacular at the Crazy Coqs venue in Bar Zédel.

Partnered with Michael Roulston, on piano, they perform a tour-de-force of a show that takes a deep dive into the life and works of Victoria Wood, they do this without alienating anyone in the audience, so if like me, you’re not a super fan, just an occasional viewer you can still find so much to laugh at and enjoy. My memory of Wood’s work is always comedy, however, I have now learnt about the softer, more emotive side of her work. Paulus was able to take his audience from roars of laughter to silence and the wiping of a tear as we are enchanted by his delivery.

Paulus is a true cabaret great, and I don’t say this lightly. He is a master of theatricality and performance; one of his talents is living the songs he sings, as an audience we are under his spell. He doesn’t need to put on a northern accent and pretend to be Victoria, he just sings the songs as they were written, beautifully enunciated with heart and soul. This is enough.

The show at 90 minutes long, with a brief 10-minute interval, is enough for Paulus to showcase 19 songs, (YES 19!!) including The Ballad of Barry and Freda (to which the audience sang along).

This cabaret not only showcases what a talented comedian, actress, lyricist, singer, composer, and pianist Victoria wood was but also highlighted the sheer volume of words she was able to fit into her songs, the amazing stories she told and how each song/story connected her to her audience. She held the balance between performer and the everyday woman. Like Victoria, Paulus has been faithful to these traits, he successfully brings her work to life through musicality, charm, and empathy, if nothing else you must applaud Paulus’ breath control as he seamlessly performs the 16 verses that are the Ballad of Barry and Freda. (How he remembers the words is beyond me)

This show is a highlight of my year and I’d love to go again!

If I’m honest, I think that this show would sit perfectly in the London Palladium on a Sunday night, where the royalty of variety and cabaret rightly belong. The Ballad of Victoria Wood and Paul L Martin – “Let’s do it!”

Titus Andronicus is not usually a comedy, it is usually a bloody, villainous and vengeful tale, but tonight it is a comedy and a rather amusing one at … END_OF_DOCUMENT_TOKEN_TO_BE_REPLACED

This show is not without clichés - there are three of note in this production. Firstly, the French horn of the show’s title is personified, speaking … END_OF_DOCUMENT_TOKEN_TO_BE_REPLACED

There’s very little in the way of set in this show: aside from chairs, a few crash barriers and at one point, a red carpet, the actors’ movements … END_OF_DOCUMENT_TOKEN_TO_BE_REPLACED

South African born, but raised on the Isle of Man, Pierre Novellie is a true raconteur rather than just another 'stand-up' comedian. He says about his … END_OF_DOCUMENT_TOKEN_TO_BE_REPLACED

This show, Willy Hudson began by saying, is about himself. It is written by himself, is directed by himself and executive produced by himself. Almost … END_OF_DOCUMENT_TOKEN_TO_BE_REPLACED