Lost Origin is an immersive show with a mixed-reality twist. It is a collaboration of immersive arts/museums’ content creator Factory 42, The Almeida Theatre, Sky, the UK Research and Innovation Group, and the University of Exeter. Pre-pandemic, it began as an exploration of what the future of performance might be. After Covid hit, it pivoted to the form in which it can be seen today. Unfortunately, this complicated history and multi-party collaboration shows. As a technology demonstration it impresses, but in spite of whole-hearted acting, the narrative performance isn’t quite there. 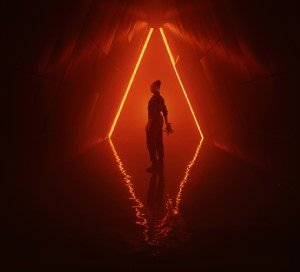 We’ve been enlisted (in a group of up to six) to investigate a dark web group selling contraband, and its alleged front organisation. But more is going on than meets the eye. Luckily, there’s an experimental headset for that.

A quick note on terminology. Augmented reality / mixed reality (let’s not dwell on the difference) refers to the use of technology to layer additional objects into your vision. If you (or your kids!) have played Pokemon Go, you’ll have experienced the discovery of virtual Pokemon, hidden around the real, geographical world.

With a brief calibration, the tech here excels, and everyone in my team coos and giggles as the world expands before our eyes. Given that the set building is already a highlight, this only adds to the immersion. We explore a warehouse, break into a vault, and journey through another zone with a different feel which I’m not going to spoil. There’s even a little stage magic to manage the transition along the way.

We’re led by an actor, another on comms, and a live-action antagonist, while encountering a virtual A-lister along the way. The actors do a good job of improvising responses… and yet – the path is so linear and narrow, this isn’t one of those immersive experiences where we feel in charge, rather than along for the ride. The information we uncover is just a cue for the next part of the rollercoaster ride we’re travelling inexorably along.

Don’t get me wrong, each part of the experience is enjoyable, and as we progress it does feel like we’re exploring something new. It’s just that there’s a ‘too many cooks’ set of partners, and a mishmash of themes and genres, which results in an ultimately unsatisfying blend. The collaborators want to investigate what the future of entertainment might be, and Lost Origin certainly seems to point in one direction of travel. With a bit more focus on narrative, and storytelling, and, yes, learning from some of the experts currently pioneering audience-led immersive experiences, it might get wherever that is soon. It just hasn’t quite yet.

This play was first put on at The Mill at Sonning in early 2010 - the world has, of course, changed significantly since then, and the script has been … END_OF_DOCUMENT_TOKEN_TO_BE_REPLACED

It’s easy to see why the Orange Tree has brought this one back for another run, less than a year after its first outing here. This is a bold, … END_OF_DOCUMENT_TOKEN_TO_BE_REPLACED

I always loved Choose Your Own Adventure books. Definitely not the Steve Jackson ones where you had to roll dice (who did that?) to find out whether … END_OF_DOCUMENT_TOKEN_TO_BE_REPLACED

Well, there’s a bit about Pablo Picasso’s (1881-1973) paintings in this show that bears his name. But it’s mostly about his approach towards women. … END_OF_DOCUMENT_TOKEN_TO_BE_REPLACED