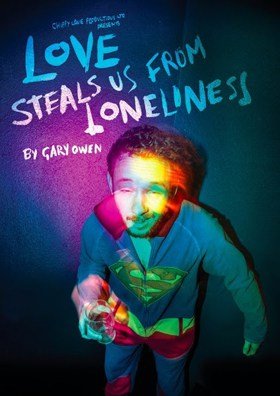 Two people – friends of friends – are chatting in Bridgend, finding out about each other through admitting they already know more than the other one thinks. Catrin (drunkenly slurred by Evelyn Campbell) takes off her knickers and squats to urinate, whilst Scott (played with an awkwardly confident unease by Rhys Warrington) looks away before lending her his father’s handkerchief to wipe. Then, one night, everything changes. And then, through intertwining narratives, we’re exposed to the aftermath.

Gary Owen’s revelation of love, loss and grief is storytelling at its best, as he runs a poetic river throughout the narrative with ‘riding spasms of puke’ and ‘[staggering] out of the closet and into a world of cock’. The dialogue is true to life and chunky speeches delve deep into the inner emotions of humanity; for example, as Mags (Emma-Jane Goodwin) poignantly struggles with the guilt of wanting to live her life despite all she has lost, through a persistent offering of chips from her daughter, Becky (Rebecca Jane Hammond).

Direction by Kim Pearce creates a constantly revolving change in the shape of the space, effortlessly moving actors in and around each other, whilst maintaining the intrinsic quality at the heart of the text. This is a play about people trying to work things out, and Pearce doesn’t put a step wrong in bringing Owen’s masterpiece to life. The actors play against a backdrop of silver shimmer curtain, taken down and put back up again, accompanied by a glitter ball which clearly establishes the setting of the karaoke bar.

The focus of the ensemble makes this play very special, particularly in the second act as each listens and watches each other tell their story. Reaching out to the audience, Goodwin, Campbell and Warrington exhibit pure, honest sorrow, openly revealing the vulnerabilities of their characters’ emotions. They are loyally supported by Hammond and Andrew David (Mikey), leaving not a single weak link in the cast. Laughter through tears echo through the lingering smell of stage smoke and alcohol, comfortably trapping the audience in authentic moments of intensity.

Owen’s greatest achievement is procrastinating with intent; allowing characters to break out of thought to comment on the technicality of what’s being said, whilst all the while maintaining the flow and providing valuable insights into human thought tracks. The love is sincere, the loss is tragic and the grief is crucially relatable.

Words cannot express the text, vision and execution of this five-star piece, but they shall try.

Age guidance 15+
120mins including an interval

Before and after a night that changed everything.
One of Wales’ foremost playwrights, award-winning Gary Owen (Iphigenia in Splott – National Theatre, Violence and Son – Royal Court) returns to his hometown, Bridgend, with a powerful, darkly witty and wildly funny piece of Theatre.

“I hear Lee start his mini and the headlights flick full on and everything in the lounge is white light or deep shadow then Lee pulls away, and dark takes the room again, and out the window I see Catrin, standing on the pavement, crying. And I think, good for you son. I know. “

Love Steals Us From Loneliness ventures into the darker sides of life. Be prepared to contemplate love, loss, grief, and whether you’re a “Townie” or “Valley Commando”?

Shoes, one would have thought, are fairly recession-proof. The problem for Charlie Price (Joel Harper-Jackson, reprising the role he previously played … END_OF_DOCUMENT_TOKEN_TO_BE_REPLACED

The descriptions of what happens in this show are so vivid that paradoxically they leave nothing to the imagination – and, at least at the performance … END_OF_DOCUMENT_TOKEN_TO_BE_REPLACED

Although not entirely perfect, this staging – the first ever in the UK – of Pablo Sorozabal’s Zarzuela (Spanish Operetta) is brilliant, atmospheric, … END_OF_DOCUMENT_TOKEN_TO_BE_REPLACED

As theatre productions go this is a memorable, magical experience filled with heart and love and so many tiny thoughtful details, that I’m not sure a … END_OF_DOCUMENT_TOKEN_TO_BE_REPLACED