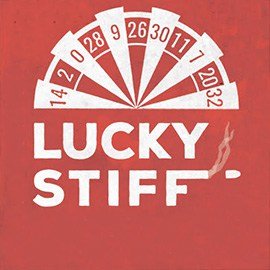 Where there’s a will, there’s a way or so runs the old proverb. Originally, the word ‘will’ in that sentence meant determination to achieve something but, in Lynn Ahrens and Stephen Flaherty’s musical farce Lucky Stiff at the Drayton Arms, the ‘will’ in question is a genuine last wishes of a deceased man.

Mild-mannered young man Harry Witherspoon (Matthew Whitby) is bored with his life as a shoe salesman and dreams that one day something more exciting will come his way. The answer to his prayers seems to come in the form of a summons to a solicitor’s office where he finds out that his uncle, Tony Hendon (Paul Tate) has died and left him six million dollars. Unfortunately, there is a caveat. Before getting his hands on the money, Harry must take his uncle – in the form of his wheelchair sat embalmed body – for a week long vacation to Monte Carlo. If Harry fails to carry out his uncle’s requests then the inheritance will go to his uncle’s favorite charity, the Universal Dog Home of Brooklyn. Over in Atlantic City, Uncle Tony’s mistress Rita La Porta (Elizabeth Chadwick) confesses to her optometrist brother Vincent Di Ruzzio (Andrew Tuluck) that she killed Tony, believing him to be having an affair, and that the two of them had planned to go to Europe along with six million dollars stolen from Rita’s casino owning husband. She knows about the will and sets of with Vincent to retrieve ‘her’ money from Harry.  Also aware of the will is Annabel Glick (Michelle Crook) a representative of the dog’s home who is watching Harry closely for any sign that he is not fulfilling all his uncle’s wishes and  thereby defaulting on the will. With all these people – both living and dead – running about Monte Carlo, is there likely to be a happy ending for anyone and if there is then does the mysterious Luigi Gaudi Nicholas Chiappetta) hold the key to everyone’s heart?

Lucky Stiff is a fast paced musical that from the opening number, with all ten characters on the stage, grabs the audience’s attention and holds onto it for the next two hours. Let’s be honest, the plot – sort of “Weekend at Bernie’s” crossed with a Hope/Crosby Road movie – is a bit iffy and really shouldn’t be examined too closely. My companion and I spent the interval trying to second guess where the story was headed, and got it completely wrong, but that was part of the fun of the show. And believe me, this show is fun and highly enjoyable. Despite the limited performance space, Director Marc Kelly makes excellent use of every inch getting his cast running about the place at a frenetic pace and yet never seeming to overfill the stage. My one quibble was with some of the scene changes which I felt were slightly long and broke the atmosphere a little. 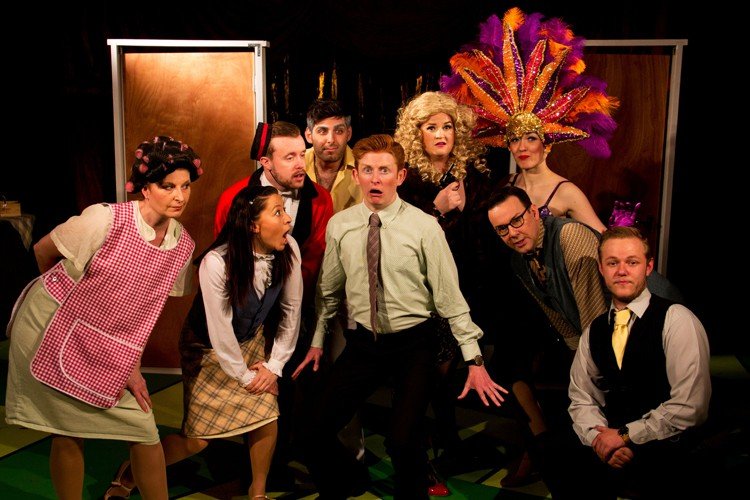 The cast themselves were on fine form with Paul Tate turning in an amazing performance as Tony Hendon and bringing a whole new meaning to the term ‘corpsing’. My other favourite was Elizabeth Chadwick as Rita La Porta. A wonderfully over-the-top character, Rita, with her inability to see straight and her tendency to blame everyone but herself for life’s problems was completely unpredictable and every scene with her had you sitting on the edge of your seat wondering what she would do next. Elizabeth could easily have over-stepped the mark with her portrayal of Rita, but kept her brashness in check just enough that despite everything the character had done – and there was a lot  – you couldn’t help loving her. Matthew and Michelle are lovely as the two leads – Harry and Annabel – they look good together and sing well together. Funnily enough in some ways they reminded me of Princeton and Kate Monster from ‘Avenue Q’. There was that same air of sweet innocence about them and you almost feel as though neither of them should be let out alone in the real world.

The musical numbers supplied by the three piece band under, MD Kieran Stallard, were for the most part, pretty good and did their job of moving the story along or giving an insight into a character, very well though there were occasions when the instruments rather drowned out the singing, and there were some really great vocal performances both solo and with the complete ensemble.

All in all then Lucky Stiff is a thoroughly enjoyable example of good old fashioned musical theatre, that has some great performances from a very talented cast, and will keep you entertained and enthralled as the story of a dead man’s holiday is played out in front of your eyes.

Something funny’s going on…
With a mysterious murder, mistaken identities, and a corpse in a wheelchair, Lucky Stiff will leave you dying of laughter.

When Harry’s uncle is murdered, his dull life is about to be turned upside down with an inheritance of $6million. There’s just one catch – he must first take his uncle’s embalmed body to Monte Carlo for one final trip of a lifetime. Suddenly he’s propelled into a chaotic world of casinos, jilted lovers and a hunt for lost diamonds. But if Harry fails in passing off Uncle Tony as alive, the cash goes to the Universal Dogs home of Brooklyn, and they’re keeping a very close eye on him…

A hilarious and offbeat musical farce, Lucky Stiff combines hysterical lyrics and a tuneful score from Tony Award-winners Flaherty and Ahrens (Ragtime and Disney’s Anastasia), with an ensemble of zany characters and fast-paced comedy.

This production is brought to you by MKEC Productions following their acclaimed staging of The Baker’s Wife  here at the Drayton Arms and Elegies for Angels, Punks and Raging Queens at the White Bear.
http://www.thedraytonarmstheatre.co.uk/

This isn’t the first production to go down the road of referencing a one-star review of their show (from a different publication, I hasten to add). … END_OF_DOCUMENT_TOKEN_TO_BE_REPLACED

Two sisters reunite after the death of their mother, and secrets pour forth. Robert Holman’s new play gently exhibits talented classical acting in a … END_OF_DOCUMENT_TOKEN_TO_BE_REPLACED

Everyone’s vexed in this show, though some have clearer reasons to be than others. Mrs Driscoll (Tameka Mortimer) is struggling with a home life that … END_OF_DOCUMENT_TOKEN_TO_BE_REPLACED

The penultimate production of the 2021 Tête à Tête Opera Festival, based at London’s Cockpit Theatre and showcasing contemporary and avant-garde new … END_OF_DOCUMENT_TOKEN_TO_BE_REPLACED

Relatively Speaking premiered in 1967 and is the sort of show that is, by contemporary standards, very much of its time, and not just because of … END_OF_DOCUMENT_TOKEN_TO_BE_REPLACED