There is nothing in Lucy Porter’s show, or so Porter herself asserts, for the younger generation: it is all about her mid-life crisis and what she did to overcome it. The problem, for want of a better word, is that there was also a global pandemic, so the cynic in me isn’t quite sure whether certain exhibited behaviours are really part of a mid-life crisis or just coping mechanisms for parents of dependent children under public health restrictions. Perhaps it’s a bit of both, and the show wonderfully explores the various complexities and intricacies of daily living. 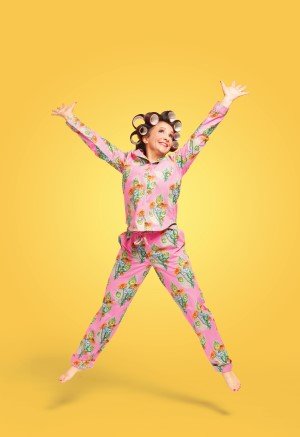 Porter’s inviting charm is refreshing in a world where so much comedy is of the hardcore variety with the shock factor cranked up to the max. There’s a pacy delivery, occasionally a little too brisk, such that she has to correct herself, but overall the narrative flows very well, introducing the right amount of (real) characters into her story, even if the audience gets to know some of them far better than others. Much is said about her husband, actor Justin Edwards, who has apparently taken a very different approach to the mid-life crisis to Porter, who has opted for continuing to see a group of close friends as often as their schedules will allow.

For whatever reason, there’s a bed on stage. Porter uses it for just a few seconds but it’s there, centre stage, for the entire show. It left me wondering if the accumulation of unnecessary things is part of the whole mid-life crisis package. That said, there’s nothing else in terms of set or props, so Porter can hardly be accused of hoarding. In the end, it all smacks of, “Crisis? What crisis?” – as far as I could deduce, inadvertently performing dance moves to a contractor’s son and his colleague rather than, as intended, the contractor himself, seems to be as calamitous as things get.

Still, there are plenty of laughs in this show, which isn’t, despite Porter’s top-of-the-show ‘health warning’, impenetrable for anyone under forty. Without giving too much away, there’s an encouraging and hearty conclusion. Such an optimistic – and realistic – view of the future for us all is a welcome relief at a time of crises of other kinds. With a show that oozes with positivity, Porter is a light in the darkness.

‘Wake-Up Call’ is a show about revelations, realisations and epiphanies – both large and small. Subjects covered include: Bin collection schedules, the novels of Jean Rhys, cats, school fair booze tombolas, the Scottish Enlightenment, pressure washers and Huel. It’s an exuberant, silly show with some wisdom sprinkled on top.

Harold Shipman, known to his many patients, family and friends as ‘Fred’, was Britain’s worst serial killer. The official inquiry into his crimes … END_OF_DOCUMENT_TOKEN_TO_BE_REPLACED

Being one of Arthur Miller’s best-made and most challenging plays, The Crucible is also one of his most frequently performed. I was going to say … END_OF_DOCUMENT_TOKEN_TO_BE_REPLACED

To be fair, Linda Lavin called her concert Love Notes, there’s an album of the same name, and that’s more or less what it was about - variations on … END_OF_DOCUMENT_TOKEN_TO_BE_REPLACED

Noughts & Crosses is a euphemism for blacks and whites. The Noughts are the whites and the Crosses are the blacks. In the world of the play, the … END_OF_DOCUMENT_TOKEN_TO_BE_REPLACED

This ‘juke box’ musical offers highly polished, undemanding, feel-good entertainment, showcasing, as it does, 30 songs dating from the 1960s to the … END_OF_DOCUMENT_TOKEN_TO_BE_REPLACED