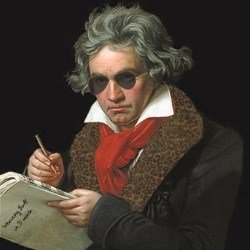 Ludwig Live! is written by multiple Emmy Award-winning writer Nancy Holson, and is currently playing to audiences at the Edinburgh Festival following a short residency at Leicester Square Theatre in London.

The show is just under an hour long and runs every lunch time at Amphitheatre in The Space at Symposium Hall. The piece is a musical comedy two-hander perfectly performed by the very talented actor/musician Robert Hazle as Ludwig Van Beethoven and the multi-talented actress, dancer, singer Anita Creed as LVB’s long-suffering stage manager, Kathy.

The premises is simple, LVB is immortal, he has written operas, sonatas and symphonies, it’s now 2015 so why not get on trend and write and perform a Cabaret – a wondrous show with song, dance, music with an ensemble of the best performers about. Great in theory, but as we learn, LVB’s temper is synonymous with his 5th symphony (or if you’re like me, the song that starts, Der Der Der Der!!) and he easily offends all around him.

Without giving too much away, I can tell you for certain that this is a rollercoaster of relentless laugh out loud silliness that will have you smiling for hours and days after the show. When his cabaret doesn’t go to plan, LVB relies on his stage manager to save the day.

Robert Hazel gives a strong, determined and focused performance as LVB, his piano playing is beautiful to hear and his comic timing is brilliant. Anita Creed plays Kathy the stage manager as well as various other characters including Mozart, LBV’s Mother, LBV’s various love interests, A Dalek and Lady Gaga! What comes across is that Anita is a very talented performer, she moves from one character to another with great ease, her comic timing is on point, so is her morph in to characters of various ages, sexes, eras and accents. The role of Kathy is hugely demanding and requires a performer who can sing in a variety of styles, genres and octaves, dance a number of different styles, juggle, impersonate various accents and remain focused without corpsing when things don’t go to plan. Anita Creed is hugely talented who pulls this off with ease making her tour-de-force of a performance look like a walk in the park! Definitely someone to look out for in the future.

There is one particular part in the production where LVB proclaims his influence on the whole of the music industry – this part of the production is Hilarious as LVB regales each music genre and demands his actor to perform as if she is his performing monkey there for his amusement, it is here that both performers work together to produce a comedy routine at its best.

The real surprise comes at the end of the piece when the tempo comes down and we actually recall how wonderful the music of LVB actually is, the ending is tender and heartfelt and ensures that you leave the venue with a big grin on your face, along with a revised opinion of Ludwig Van Beethoven.

All in all, if you are looking for an hour of fun, silliness coupled with beautiful music and a history lesson then I would suggest Ludwig Live.

Ludwig van Beethoven has written operas, sonatas, and symphonies. What’s next for the immortal genius? Why, a swinging cabaret act, of course! Join Beethoven as he sings about his angry mistresses, his rivalry with arch nemesis Mozart, and his senile mentor Haydn. With his trusty stage manager Kathy by his side, Beethoven bemoans Bieber, sighs about Cyrus, and tells you the one thing wrong with One Direction. Roll over, Beethoven? Not tonight! Ludwig Live! is written by multiple Emmy Award-winning writer Nancy Holson. ‘Funny enough to make me choke and gag with laughter’ (J Peter Bergman, BerkshireBrightFocus.com).
http://www.thespaceuk.com/shows/ludwig-live/