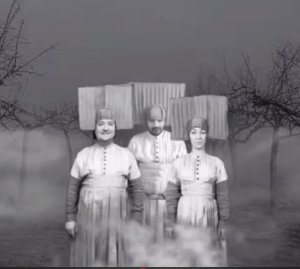 Theatre creatives are becoming increasingly inventive – and daring – in their response to the continuing moratorium on live theatre as we know it. One such is Northern Ireland’s Big Telly Theatre Company whose new production of Macbeth is a bold, invigorating and at times disturbing alternative to yet another night curled up with a book or a box set.

Macbeth is perhaps the most familiar of Shakespeare’s plays; it is certainly the most accessible, especially to a younger audience. Who doesn’t like witches? Decapitations? Even to an audience suckled on the blood-soaked sex and dragons of Game of Thrones, the twists and turns of Shakespeare’s take on Scottish history make for a visceral experience, too difficult one would think to translate to the socially distanced dystopian hell of Zoom. But one would be wrong.

From the pre-show exhortation to keep one’s camera on, Big Telly set out to surprise. Astonishingly the actors have never met each other, nor inevitably have they rehearsed together. Astonishingly they are performing live. There is no set but there are multiple sets thanks to Zoom’s ability to provide a virtual background and, again astonishingly, there are special effects – simple but effective. There is no technical crew – each actor is alone but in costume. And there are only five actors in a play with at least 11 characters.

The cards then are stacked firmly against director Zoe Seaton.
It shouldn’t work.
But it does. Brilliantly.

As Lady Macbeth, Nicky Harley is a sociopathic dervish – seductive, compelling, violent – while Dennis Herdman’s Macbeth maintains a careful balance between a king in thrall to his wife and the insecure machismo of a man who learns he is born to be king but not for long. Following in his father’s large footsteps, Aonghus Og McAnally is a passionate and fiercely vengeful Macduff while Dharmesh Patel is an attractive Banquo, compelling and at times sinister as he architects the usurper’s demise. The final actor is Lucia McAnespie whose brief scenes as Lady Macduff are unforgettable and whose death provides one of the most horrifying scenes I have ever seen in a theatre. Even the confusing doubling of the witches by McAnally, Patel and McAnespie can’t diminish the power of the actors in their “main” roles.

On the technical side, the virtual backgrounds work exceptionally well with only a little “submergence” from time to time. Garth McConaghie’s music is sinuous and atmospheric, gelling with the actors’ performances and helping to overcome the obvious constraints of watching theatre on a screen at home. And for the most part, the director’s decisions are inspired other than a chaotic scene in a theatre setting, and the jarringly wrong final “song”.
This is a strong and entertaining production of a classic play from Northern Ireland’s most exciting theatre company. It is just a shame that there cannot be a cast party, at least not until CoViD-19 is as dead and buried as Shakespeare’s “fiend of Scotland”.

Headlining the Belfast International Arts Festival from 14th to 17th October.
Virtual transfer to Oxford as a co-production with Creation Theatre until 31st October.
Tradition requires that a ‘ghost-light’ be left on while the theatre is dark, to ward off restless ghosts and protect its magic from harm.
The lights are off, but the magic is not gone.
A closed theatre is a perfect playground for mischievous spirits intent on wreaking havoc.
Three witches usher, stage manage and execute the tragedy of Macbeth and Lady Macbeth, two innocents trapped in a Truman-esque reality which is both virtual and brutal.


I wouldn’t exactly say Ben Forster appearing as himself in this musical comedy is a career highlight (he is, after all, someone who has played the … END_OF_DOCUMENT_TOKEN_TO_BE_REPLACED

It’s an intricate plot, laced with some subversive humour - that the female character is simply called ‘The Woman’ (Molly Lynch), for instance, is … END_OF_DOCUMENT_TOKEN_TO_BE_REPLACED

Andrea McArdle didn’t, when the 1978 movie Rainbow was released, look or sound like Judy Garland, and she still doesn’t. You’d be forgiven for … END_OF_DOCUMENT_TOKEN_TO_BE_REPLACED

TENNIS ELBOW is the first play that John Byrne has written for thirteen years, and is in fact a companion piece to his critically successful Writer’s … END_OF_DOCUMENT_TOKEN_TO_BE_REPLACED

It’s all a bit banal, really - or perhaps I’m too heavily influenced by some of the other online productions that I’ve seen recently, which deal with … END_OF_DOCUMENT_TOKEN_TO_BE_REPLACED