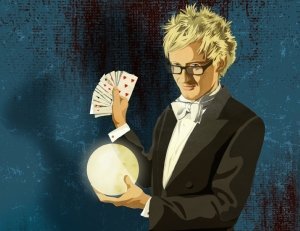 I am a sucker for magic. I just love it. I can sit for hours watching magic shows. Even when I know how a trick is done (and I have watched every episode of ‘Breaking the Magician’s Code: Magic’s Biggest Secrets Finally Revealed’) I still find the whole art fascinating. So, you can imagine how excited I was to be invited to Le Meridien Piccadilly to review a new Covid-secure show called Magic and Mind-Reading.

Arriving for the show, everyone was asked to do a small task – and no, I’m not going to tell you what it was – and then escorted to our tables. The venue felt like a very intimate cocktail bar, with subdued lighting, and well-positioned tables to give everyone the space required but also a good view of the small, well-illuminated stage at the end.

The show is in two halves and, as well as the trickery, Tony Middleton ‘Sonic’, who performs first, gives us some fascinating history of magic in London back in the late 19th Century. Sonic is followed by fellow magician Edward Hilsum who brings the show right up to date with magic from the 21st Century. Now, in the tradition of no-spoilers, I will not be telling you much about the various tricks in the show. What I will tell you is that there has obviously been a lot of work put into designing the show to be fun and still Covid-secure. So, there was audience participation, which was something I thought they might have had to curtail. This really added to the show as the reaction of members of the public, especially youngsters, really adds to the effect of whichever trick is being performed. In truth, some of the atmosphere was missing due to the limited numbers able to attend, which was a shame as Sonic and Edward are both consummate professionals who are obviously masters of their trade and are very entertaining. Did I have a favourite trick? Well yes, I did. Obviously, I can’t tell you anything about it, when you see the show, you’ll soon get the picture as to why I loved it.

As well as the physical tricks, there was some highly impressive mind-reading, again involving the audience. One involved books and words chosen at random. Interestingly, in my head, I guessed one of the words before Sonic. I’m not saying I’m in any way psychic, because I didn’t get any of the others and was as amazed as everyone else at the end of that particular segment.

The overall production is very well put together and contains something for everyone. A bit of history, audience involvement, shocks, and surprises where – even through the masks – you can hear the gasp of an enthralled audience. This is especially true of the last trick – in which I played a small part – which involved both magicians and elegantly fused the old and the new to produce something quite spectacular. I really admired how the show was put together. Yes, there were masks and hand sanitizer, but that became a small part of a much larger and entertaining experience, reminding everyone that, despite everything, there is still magic in the world.

Magic & Mind-Reading runs weekly on Saturday nights at the 5 star Le Meridien Piccadilly from 19th September. Classic conjuring makes a come-back in this intimate theatrical experience that will leave you gasping in astonishment and cheering with delight. These new performances hark back to the parlour shows of Magic’s Golden Age, but our magicians will do the impossible right in front of your eyes without even touching you. Get in quick – there are only 30 seats per show.

Titus Andronicus is not usually a comedy, it is usually a bloody, villainous and vengeful tale, but tonight it is a comedy and a rather amusing one at … END_OF_DOCUMENT_TOKEN_TO_BE_REPLACED

This show is not without clichés - there are three of note in this production. Firstly, the French horn of the show’s title is personified, speaking … END_OF_DOCUMENT_TOKEN_TO_BE_REPLACED

There’s very little in the way of set in this show: aside from chairs, a few crash barriers and at one point, a red carpet, the actors’ movements … END_OF_DOCUMENT_TOKEN_TO_BE_REPLACED

South African born, but raised on the Isle of Man, Pierre Novellie is a true raconteur rather than just another 'stand-up' comedian. He says about his … END_OF_DOCUMENT_TOKEN_TO_BE_REPLACED

This show, Willy Hudson began by saying, is about himself. It is written by himself, is directed by himself and executive produced by himself. Almost … END_OF_DOCUMENT_TOKEN_TO_BE_REPLACED